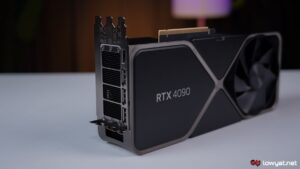 NVIDIA and its relationship with AI is nothing new, with its application of the medium ranging from smart automotive and self-driving vehicles, to helping video game developers train their game through its DNN servers, so as to better apply and implement its ray-tracing and DLSS upscaling technology in them. Having come this far, rumour has it that the company is looking to develop its next set of GPU drivers using AI.

According to CapFrameX (@CapFrameX), NVIDIA is supposedly already working on a set of AI-optimised drivers, and said drivers could be available as early as the first quarter of this year. Again, this is still just a rumour and the GPU brand has yet to make any formal announcement, so we do ask that you apply a healthy dose of skepticism here.

Up to 30% more performance

No info about specific gen

Take this with a grain of salt. If true Nvidia drivers will be real “fine wine”. pic.twitter.com/QGTUL9iK7N

With that out of the way, if the rumour is to be believed, CapFrameX says that NVIDIA’s supposed AI-optimised drivers could deliver as much as a 30% improvement in performance. However, it is not clear how these improvements would be implemented.

For that matter, there is a possibility that NVIDIA’s AI-optimised drivers will be derived from an automated process, based on a large database of performance profiles from several different systems, which can then be implemented through a one-button switch. If this sounds familiar, it’s because AMD is actually working on a similar technology, known as HYPR-RX. That technology include Radeon Super Resolution, which is system-wide upscaling technology designed to improve the performance of titles that do not support or have its other upscaling technology, FidelityFX Super Resolution (FSR), baked into it.

Unfortunately, CapFrameX’s tweet doesn’t provide further details about NVIDIA’s supposed AI-optimised drivers. Having said that, and given the GPU brand’s track record with AI as a whole, we’re open to giving the new technology try when and if it makes its debut during this quarter.

The post NVIDIA Rumoured To Be Working On AI-Optimised Drivers With Improved Performance appeared first on Lowyat.NET.