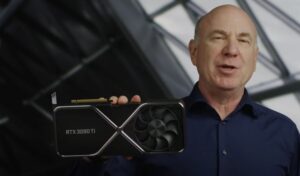 NVIDIA’s launch of its GeForce RTX 3090 Ti is just a day away from its alleged launch date but, as you well know that old adage, that hasn’t stopped the rumour mill from churning out new….well, rumours. For that matter, the latest gossip piece surrounding the GPU maker’s upcoming powerhouse GPU seems to revolve around just how much of an improvement it is, over the RTX 3090.

Based on one posting by CapFrameX (@CapFrameX), the RTX 3090 Ti is expected to only be up to 10% faster than its non-Ti counterpart at 4K resolution, while maintaining a consistent boost clock of 2GHz across the board. To put it in another way, that’s approximately 43 TFLOPs of single-precision compute power being churned out by the RTX 3090 Ti.

But that’s just one claim in the sea of rumours. Another rumour monger who goes by the Twitter handle MEGAsizeGPU (@Zed_Wang) says that the RTX 3090 Ti is only 5% faster than the RTX 3090, though once again, they offer no proof to the claim. Interestingly, there is also conflicting information about the pricing of the card; some reports are suggesting that the card will launch at the same MSRP as the RTX 3090 when it first debuted, which is US$1499 (~RM6320), which means that the RTX 3090 could effectively get a reduction in price, although by how much is anyone’s guess.

However, according to another source, NVIDIA may actually set the MSRP of the RTX 3090 Ti at a higher price of US$1999 (~RM 8428), which would make more sense, given the extra trimmings NVIDIA is loading it up with.

Whatever the case, what has seemingly been confirmed is that the RTX 3090 Ti will have a Founders Edition, and that this card will be a litmus test for NVIDIA before the launch of its GPU series.

The post NVIDIA GeForce RTX 3090 Ti Rumoured To Only Be Up To 10 Percent Faster Than RTX 3090 appeared first on Lowyat.NET.