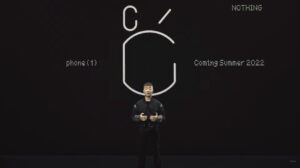 Nothing just recently concluded its virtual keynote The Truth, revealing its goal to deliver consumers with an open ecosystem of products that will work seamlessly with those from other brands. Of course, that isn’t the only thing that Carl Pei’s startup had in store for the event as it also gave viewers a vague tease of its first ever smartphone, as well as a first look of its upcoming Android-based operating system.

It’s also worth mentioning that the Nothing CEO also took the opportunity during the event to praise Apple for the various innovations it has introduced, but at the same time criticising the brand for keeping consumer technology stagnant. Nothing wants to change this perception of tech to bring optimism back so [it] will stand for progress again… excitement, a better future,” he said in the presentation. “We’re building the most compelling alternative to Apple.”

Like the Nothing ear (1), Pei promised that the company’s first smartphone product – known officially as the phone (1) – will offer consumers with something fresh, and further act as a “wake up call that the industry needs.” While that may sound exciting, the company barely revealed much of its upcoming handset – showing only silhouettes of the phone (1)’s rear design.

Based on the teaser graphic, it appears that the device will feature what could be a pill-shaped camera arrangement on the upper left corner, as well as a mysterious large partition in the centre. There’s also a diagonal line on the upper right corner and a vertical one below the partition, which may just be design elements or something entirely significant. “You might not get it just yet, but trust me it’s stunning,” Pei assured. As mentioned in the presentation, the company is set to fully reveal the phone (1) in summer of 2022.

Next up is the Nothing OS, which the CEO says will offer “the best of Android combined with [the company’s] iconic design language.” It is revealed that the first-party operating system will not only feature Nothing’s dot matrix-inspired typeface and graphics throughout its interface, but also seamless and fast transitions between screens. Nothing also revealed a first-party voice recorder that comes with the OS, which features a fully interactive tape reel that can be used to adjust a recording’s playback speed.

In terms of performance, Pei claims that Nothing OS will be fast and smooth – delivering the optimal processing power and RAM for the exact app that is being used. It will also retain most of Google’s stock Android applications but removes any unnecessary bloatware. In addition, the CEO promises that Nothing will provide phone (1) users with three years of frequent OS updates and four years of security updates.

Unlike the company’s first smartphone, users interested in Nothing OS won’t have to wait until summer in order to try it out for themselves. Nothing will release a launcher version of its operating system for download and install on select Android models this April.