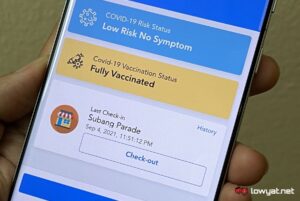 With the country reopening around the corner, more than two million Sinovac recipients and some of the elderly will be losing their fully vaccinated status on 1 April due to their refusal to take booster shots. However, the Ministry of Health (MoH) has said in a statement that following the deadline, the affected individuals will still be allowed to enter public premises.

As has been warned for months, non-boosted individuals who received the Sinovac COVID-19 vaccine or are over 60 will no longer be considered fully vaccinated. That being said, details of their primary vaccination doses will still remain on the MySejahtera app.

Apparently, owners of public premises only need to ensure that patrons have received their primary shots, so it doesn’t even matter if the non-boosted have incomplete vaccination status. This includes restaurants, malls, offices, and places of worship.

However, this privilege is only for Malaysian citizens and does not extend to foreigners, who will need boosters if they are elderly or Sinovac recipients to enter public spaces. On a separate note, there’s a possibility that the use of the MySejahtera app won’t even be mandatory soon, depending on the COVID-19 situation in the near future.