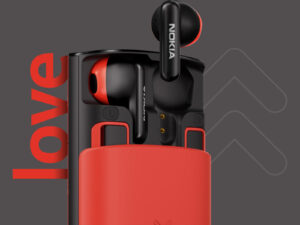 Earlier in July, HMD Global announced a lineup of new feature phones, but one interesting device that caught people’s attention was the Nokia 5710 XpressAudio. Last month saw the local release of the new 8210 4G, and now Malaysians can get their hands on the unique XpressAudio feature phone.

The Nokia 5710 XpressAudio looks like a regular phone at first glance until you slide down a rear compartment to reveal an interesting surprise. The back of the phone hides a pair of built-in wireless earbuds, essentially making the 5710 a two-in-one phone and earbuds charging case.

The earbuds seem to have hard non-interchangeable tips so they might not be the most comfortable for everyone. However, they connect via Bluetooth and are compatible with other devices, so it’s a nice bonus to have.

While it has no support for music streaming apps which didn’t come as a surprise since it is a feature phone, it can still act as an MP3 player and supports FM radio. Running on a Unisoc T107​ chipset, the 4G-enabled 5710 XpressAudio also comes with two built-in speakers in case you want to listen without the earbuds.

Furthermore, its music-centric design is further accentuated with dedicated physical buttons for media control on both sides of its 2.4-inch QVGA display. If you are old enough to go through Nokia XpressMusic era, this phone might make you feel nostalgic.

Also equipped with a 0.3MP camera and a flash on its back, the device charges via a micro USB port and is powered by a 1,450mAh battery which can last between 20 to 31 days depending on your connectivity and whether you use it with one or two SIM cards. As for the wireless earbuds, HMD Global did not give an estimate on how long they can last on a single charge nor how much their usage affects the battery life of the phone.

With support for a microSD card with capacities of up to 32GB, the Nokia 5710 XpressAudio is available for purchase on Nokia’s Shopee store, but the white colourway seems to have not made it to our shores. Priced at RM339, it comes with a charger and removable battery in the box but note that you’ll have to buy a microSD card separately if you wanna store music on it.