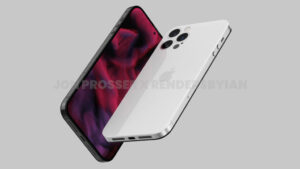 As you may recall, leakster Jon Prosser released a set of renders allegedly depicting next year’s iPhone line-up back in September. Based on the images, it is suggested that Apple may finally ditch its phone’s iconic notched design and adopt the punch-hole camera cutout for the front-facing camera – an approach that is commonly featured on most Android devices. However, not all of the next-generation iPhone series would sport the notchless design, at least according to a recent rumour published by TheElec.

Specifically, the South Korean website says that the new punch-hole cutout displays are only exclusive to the Pro and Pro Max models of Apple’s iPhone 14. These are alleged to be LTPO OLED panels developed by LG Display, and it is said that the former model would sport a 6.06-inch screen while the latter features a 6.7-inch variant.

TheElec also suggests that housed within the cutouts are 48MP front-facing cameras, but it is not known whether this applies to just the Pro variants or across all iPhone 14 models. Unfortunately, nothing else was revealed regarding the upcoming smartphone series’ hardware or camera specifications.

Interestingly, the publication also claims Apple would not include 120Hz displays on the standard variants of the iPhone 14. If true, this exclusion would certainly disappoint fans, especially given the fact that the company had only introduced this high refresh rate across all of its current-generation iPhone models.