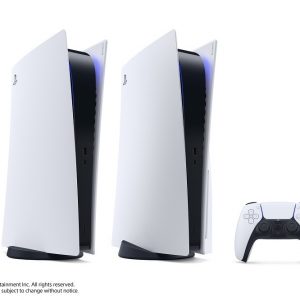 PlayStation boss Jim Ryan has said during Sony’s CES 2023 conference that the PS5 should now be easier to find on shelves. Barely a week later, people are discovering a new console bundle. Rather than the usual that only comes with one DualSense controller, this new one bundle two controllers.

The bundle was first spotted by German tech news outlet WinFuture, the PS5 consoles in these bundles will be in their latest – and lightest – iterations. Indicating this is the new model numbers, which are CFI-1216A and CFI-1216B for the physical and Digital Editions, respectively. Taking regional differences into account, this mirrors the new models that have made their way here, which are labeled CFI-1218A and CFI-1218B.

While the bundles look to be the real deal, there’s no word on their official prices yet. The report notes that some EU retailers listing them for EUR619 (~RM2907) and EUR669 (~RM3141), while others list them at EUR649 (~RM3047) and UER699 (~RM3282). Over in Australia, one of the country’s retailers known as EB Games lists the physical edition PS5 bundle with two DualSense controllers at AU$889.95 (~RM2683). No Digital Edition version of this bundle is listed at the time of writing.

Locally, the PS5 looks to still be a bit of a unicorn. That aside, it will also probably take awhile before local retailers start listing this new bundle with two DualSense controllers. Adding the prices of existing bundles with that of an additional controller, the prices should come up to RM2418 and RM2848 for the Digital Edition and the standard model, respectively. Optimism will tell us that we can expect prices to be slightly lower than that, otherwise it sort of defeats the purpose of them being bundled together. All that being said, we’ll still have to wait for SIE to announce the official prices and availability date for this new PS5 bundle.

The post New PS5 Bundle Features Two DualSense Controllers Instead Of One appeared first on Lowyat.NET.