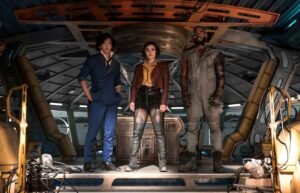 Netflix has made the executive decision to pull the plug on its Cowboy Bebop series. That’s right, the live-action adaptation of Shinichiro Watanabe’s animated series will not be getting a second season, meaning that we won’t get to see what happens after the Spike is found by the child prodigy Edward Wong Hau Pepelu Tivrusky IV, otherwise known as Radical Ed.

Netflix’s decision not to renew the show isn’t surprising, given the lacklustre performance and reception at launch. The season premiere, which consists of 10 episodes, supposedly only garnered a 46% rating on Rotten Tomatoes, but that rating drastically reduced during the last week.

In order for a series to receive a season renewal from Netflix, sources close to the Hollywood Report (THR) says that the streaming service insists that the show must maintain a positive rating of 60% or higher, which is reportedly in line with industry averages. Otherwise, Netflix sees no financial reason as to why it should renew a series.

One problem with the live-action Cowboy Bebop series was how its director tried to make a “faithful recreation” of the show or as THR’s own reviewer puts it: it was faithful to a fault. Virtually all of the sets within the show looked tacky, gaudy, and in some cases, just downright shoddy, almost as if they were put together in a frantic slap-and-dash. And that is to say nothing of the near dead-pan performance of the actors and their costumes; it almost feels as if they were being forced, but on the flip side, at least the showrunner managed to bring back Yoko Kanno, the original composer whose musical compositions for the original anime is now forever immortalised by diehard anime and jazz fans, alike.

With the live-action series now relegated to the cold, dark limbo of Netflix’s unfinished series’, there’s only one thing left to say: See you, Space Cowboy.

The post Netflix Has Cancelled The Cowboy Bebop Live-Action Series After One Season appeared first on Lowyat.NET.