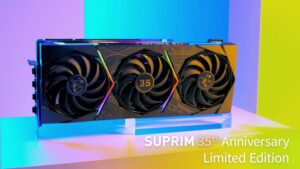 With NVIDIA’s CES 2022 keynote just around the corner, details and images of the brand’s upcoming flagship, the GeForce RTX 3090 Ti, are beginning to crop up in the form of their AiB partner cards. Earlier this week, we saw an ASUS TUF Gaming variant of the card. Today, it’s an MSI SUPRIM X version of the card.

In contrast to the TUF Gaming leak, the MSI GeForce RTX 3090 Ti SUPRIM X details that were obtained by Videocardz contains something the former lacked: an NDA with a confirmed launched date for the card. According to the NDA, MSI plans on launching the RTX 3090 Ti SUPRIM X on 27 January, a date that clearly coincides with an earlier report. On another note, this NDA also confirms the amount of graphics memory in which the RTX 3090 Ti will ship out with, 24GB GDDR6X.

Oh, and the NDA also contains several images of the RTX 3090 Ti SUPRIM X, including a 35th anniversary edition of the card.

While the rest of the RTX 3090 Ti’s specifications remain unconfirmed on an official level, rumours have suggested that the card’s GDDR6X memory will be clocked at 21Gbps. Additionally, the card is said to be the first to break the 1TB/s bandwidth barrier, have 10752 CUDA cores, and is rumoured to have a TDP that goes all the way up to 450W.