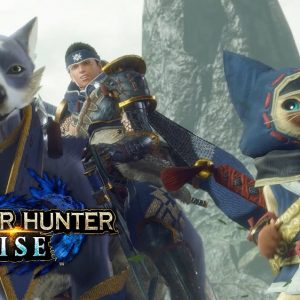 Monster Hunter Rise started out as an exclusive for the Nintendo Switch back when it launched in March of 2021. Slightly shy of a year later, it was ported to PC, with the Sunbreak expansion launching simultaneously on both platforms. Now, it looks like Capcom is launching the game for the two home console brands, and for both generations too. Not only that, the game will also be coming to both Xbox and PC Game Pass.

A new trailer announcing the new Monster Hunter Rise ports was published on the series’ official YouTube channel. Overall, beyond the new platforms, the trailer doesn’t really show anything new. Instead, it showcases an overview of features coming to the current generation consoles, which are already available on powerful enough gaming PCs.

This confirms a previous report from earlier this week that claimed that Monster Hunter Rise will be available on both Xbox and PlayStation, as well as Game Pass. Though it looks like the base game is coming earlier than predicted, as the report mentioned a spring release on said platforms.

More specifically, Monster Hunter Rise will be available on the PS4, PS5, Xbox One, Xbox Series X and S, as well as both Xbox and PC Game Pass on 20 January 2023. That being said, the earlier report is not entirely off base with its claimed release date, as the Sunbreak expansion will only be coming at a later, yet to be confirmed date. For now, the trailer only says spring 2023.

With the delayed release, this may also mean that Monster Hunter Rise on these platforms will be a little behind when it comes to the ongoing updates that the game is still getting. For context, Sunbreak got its second free title update back in September. It remains to be seen if these new platforms will be getting these title updates in a staggered manner, or if Capcom will manage to allow these new platforms to catch up immediately to their Steam and Nintendo Switch counterparts.