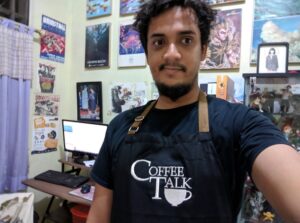 If you follow the indie games scene and like visual novels, then you’re probably familiar with Coffee Talk. If you’re a fan of the game, then you’ll probably have heard of the passing of its creator, Mohammad Fahmi, at a very young age of 32.

IGN SEA reports that his passing was first announced by his sister via his own Twitter account. Following the news of his passing, Hasnul Hadi Samsudin, head of PlayStation Studios Malaysia, said that the industry has “lost one if its brightest stars”.

Our industry has lost one of the brightest stars. ⁦@fahmitsu⁩ was someone I was always inspired by. We met at the first Level Up KL where we talked about how we could grow the region together. No words can explain how great this kind and amazing soul. I will truly miss you. pic.twitter.com/eW3YxK3Fho

Mohammad Fahmi was born on 29 January 1990, and started being a part of the video games industry as a programmer and designer at Gameloft. From there he would make the career jump from game dev to game journalist with Tech In Asia as Editor-in-Chief of its Games department.

He would later return to the game dev side of the industry, joining Toge Productions, with which Coffee Talk was released. Later, he would start his own studio, Pikselnesia, under which his next game What Comes After will be released. The studio is set to release its next game, Afterlove EP, sometime this year.

The post Mohammad Fahmi, Creator Of Coffee Talk, Passes Away At 32 appeared first on Lowyat.NET.