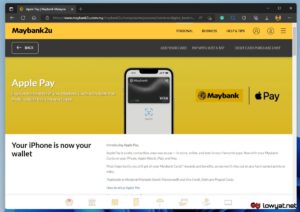 Just hours after the dedicated section for Apple Pay on AmBank’s website went live, the same has happened for Maybank. It is unclear whether the dedicated page is supposed to go live already but it is quite clear: Apple Pay is about to make its debut in Malaysia.

First shared by Lowyat.NET Forums user HumanLobster, among the information provided by the page at the moment is the list of Maybank cards that can be used with Apple Pay [pdf]. Here it is, reproduced in full:

As you might notice, the bank’s American Express (AMEX) cards will not be supported by Apple Pay at launch. That being said, the FAQ document released by the bank [pdf] said that customers will be able to add their AMEX cards in the near future.

At the same time, Maybank Corporate Cards including those issued by Maybank Islamic are not supported by Apple Pay too. Despite what we have witnessed here, you are still not able to add eligible Maybank cards into the Wallet app which indicates that Apple is not yet ready to open Apple Pay to Malaysian users just yet.

We will be updating this story with more information as we go through the new Apple Pay page on Maybank’s website, so make sure to come back and refresh this story.

Not long after our report was published, it seemed that Maybank has decided to pull out the webpage which means it is not supposed to go live today. This mirrored the same behaviour as per AmBank earlier today which decided to take its Apple Pay page down not long after it became public knowledge.

In case you missed the page, other information contained within it is the steps to activate Apple Pay for one’s Maybank card. The brief guide is generally similar to what Apple has noted inside its support document which starts by tapping the “+” icon inside the Wallet app on users’ iPhone, iPad or Apple Watch.

According to the FAQ document that has since been taken down by the bank, customers can also add their card to Apple Pay from the MAE app. This can be done from the Card’s dashboard inside the app’s Maybank2u section although our quick check showed that this method is still not yet accessible.

Given what we have seen on the page as well as the accompanying FAQ documents, we reckoned Maybank is quite ready to let its customers utilize Apple Pay. The only thing left now is for the bank and Apple to open the gate.