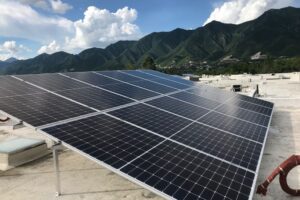 Renewable energy is all the rage these days, and for good reason. The good news is, it looks like Malaysia is taking steps to rely more on them. The government is looking to increase green energy generation to 40% of the country’s energy supply by 2035.

Energy and Natural Resources minister Takiyuddin Hassan said that the ministry has set targets for renewable energy contribution for the country in its energy transition plan. The first is the aforementioned 40% green energy supply by 2035. He says that the “installed capacity for renewable energy in Malaysia so far is 8700MW, while y 2035 the capacity is projected to double to 18000MW”.

One of them being the Large Scale Solar (LSS) projects, one of which the minister launched in Sabah. According to the New Straits Times, this program had been implemented through the Energy Commission (ST) since 2017, Eight companies are involved in the development of the LSS project in the state, which will have a total power generation capacity of 67MW, and costing an estimated RM268 million to develop.