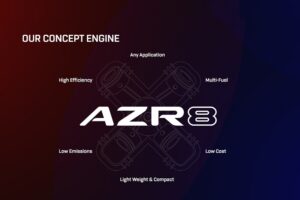 When we talk about greener cars these days, usually the first thing that comes to mind is electric cars. But jumping straight from petrol to electric cars en masse has its own issues, not only on the consumer end but also on the raw materials and supply chain side of things. Hybrids are seen as the in-between, but what if the alternative can be simply a more efficient vehicle engine that is lighter, cheaper to make, and multi-fuel capable?

That’s what local company AZR Technologies is looking to make according to a recent presentation it shared on its Facebook page. The company which currently dabbles in aviation engine contract manufacturing is now conducting R&D to come out with a high-performance engine for the automotive sector called the X8.

The two-stroke engine is based on Combined Cycle Technology (CCT) and features eight cylinders that are being arranged in an X-shaped configuration which is the reason why the engine is called X8. As part of the presentation, AZR Technologies claims that the engine can be made with fewer parts.

This, as a result, keeps costs and weight low while also meeting emission targets. The company added that the R&D for X8 will spawn other variations later, like smaller V4 and mass-produced engines, as well as generator sets.

AZR Technologies is looking to develop the X8 within the next 12 months and has recently launched equity crowdfunding at pitchIN to help make this happen. In general, it is looking to raise up to RM5 million via the campaign in exchange for up to 20% of the equity in the company.