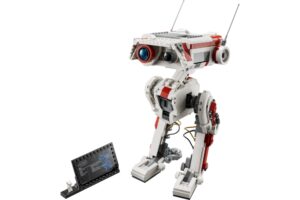 As you can probably imagine, Star Wars is a pretty popular source of characters getting the LEGO treatment. Just last year the company announced an updated version of the R2-D2 kit. This time though, it is making it possible for fans to build a video game character. Specifically, it’s the BD-1 droid from Star Wars Jedi: Fallen Order, and its upcoming sequel Survivor.

LEGO says that the BD-1 kit, when built, stands over 31cm tall, which the company also claims makes for a “fun centrepiece for any room”. I’m sure anyone with kids would disagree, but I digress. Though the company says that the kit is rated for ages 14 and up.

In terms of detail, this kit of BD-1 is pretty accurate to the actual droid in the Star Wars Jedi: Fallen Order game. Which is nice for fans of the game and the Star Wars universe in general. If only the same could be said for the Tallneck LEGO set. But again, I digress.

While the kit is listed on the Malaysian LEGO website, it doesn’t yet have a price, nor is it listed on any of the linked authorised retailers. But according to PC Gamer, this BD-1 kit is priced at US$100 (~RM438), GBP90 (~RM497) and AU$160 (~RM503). It’s also currently in its pre-order phase for those countries. So it remains to be seen when it will get an official local price and availability date.