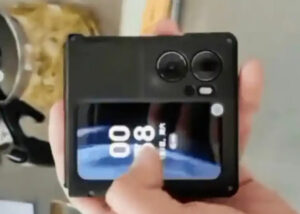 Prior rumours have suggested that OPPO is set to unveil the Find N2, the successor to its inaugural foldable smartphone, during the OPPO Inno Day event that is expected to happen sometime this month. It now appears that the device won’t be alone for the upcoming reveal, as a new leak has revealed a fully functional prototype of an alleged variant known as the Find N2 Flip. As implied by its name, this model is shown to sport a more compact clamshell design, much like similar devices such as Samsung’s Galaxy Z Flip, Motorola Razr, and Huawei P50 Pocket.

The leak itself is accredited to leakster fenibook, who uploaded images and a video featuring the alleged OPPO Find N2 Flip prototype on Chinese social media platform Weibo. For the most part, it is shown to sport a similar size to its Samsung rival in both folded and unfolded modes. In addition, it also comes with the usual makings of a typical smartphone, such as a USB-C port at the bottom, volume rocker and lock button on the right-hand side, as well as a punch-hole camera cutout on the display.

Though similar in most aspects, what really sets the Find N2 Flip (or its prototype, at least) apart from the Galaxy Z Flip series is its vertical exterior touchscreen, which is expected to display shortcuts and notifications, and also function as a viewfinder for taking selfies. Speaking of imaging, situated beside the screen is a vertically arranged dual camera setup. As for design, you might want to ignore the phone’s rugged shell, as it is likely to be a placeholder.

Those with eagle-eyed vision will definitely notice another aspect of the device that would blow its rivals out of the water: the crease-less interior display. As demonstrated via its inaugural foldable smartphone, OPPO has successfully designed a hinge mechanism that is capable of minimising the formation of creases on foldable displays, which actually makes a ton of difference. Based on the leak, it appears that the company has adapted its hinge design (or an updated version of it) to this variant of the allegedly upcoming Find N2 series. That being said, it is very likely that its larger sibling will also come with the same mechanism as well.

Like any rumour or leak, we cannot guarantee that the various forms of information provided by unofficial sources are legitimate or not. With that, we’ll only find out whether they are accurate or not once OPPO is ready to make an official announcement. In 2021, the company held Inno Day on 14 December, so chances are it might hold this year’s event around the same time frame.