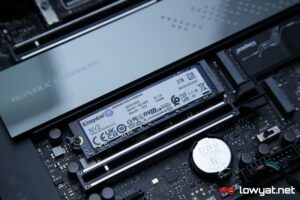 More than a year since we last reviewed Kingston’s NV1 SSD, the memory brand has officially followed up its act with a successor, the NV2. As you can imagine, the brand has made some updates to the RAM, chief among which being its carry forward into the current PCIe Gen4 standard. Somewhat, technically.

At the risk of sounding like a broken record, the NV2 is the follow-up and direct successor to the NV1. While it also retains the tradition of being an “affordable” entry, it is also currently one of the cheaper NVMe Gen4 M.2 SSD options on the market.

In terms of specification, the NV2 is built around the Phison E21 controller, versus the Silicon Motion SM2263XT that Kingston previously used on NV1. As for its NAND flash, it uses a 112-layer BiCS5 TLC.

On that note, I should point out that, despite being a PCIe Gen4 SSD, those sequential speeds are clearly more on par with previous-generation PCIe Gen3 speeds.

Truth be told, I am having trouble trying to find a downside to the NV2. If there is a bone to be picked here, I believe it would be that it lacks a DRAM cache chip. But again, this is supposed to be an affordable NVMe Gen4 SSD, so manage your expectations.

At a starting retail price of RM139 for the 250GB and a very appealing price tag of RM659 for the 2TB SKU, I can definitely see the appeal of getting myself a Kingston NV2, either on the fly or at a whim. Yes, I can hear some of you griping and trying to make an issue over the fact that its sequential read and write speeds are closer to peak PCIe Gen3 speeds, but let’s be real here: read speeds of 3500MB/s isn’t exactly what I would categorise as slow, not by a long shot.