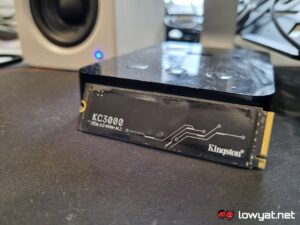 Nearing the end of November last year, Kingston officially launched two NVMe Gen4 SSDs: the Fury Renegade and the KC3000. Both models offer sequential read and write speeds upwards of 7000MB/s and as you’ve no doubt surmised, one model caters to gamers, while the other is more of an all-around choice.

In this review, we’ll be looking at the all-rounder KC3000.

As I mentioned at the start, the KC3000 is a NVMe Gen4 SSD, designed and manufactured to fully harness the lightning-fast speeds of the PCIe 4.0 interface and lanes. Officially, it is also the direct successor to KC2500 that I reviewed back in 2020.

Specs-wise, the KC3000 is available in four capacities: 512GB, 1TB, 2TB, and 4TB. Performance-wise, the KC3000 boasts sequential read speeds of 7GB/ across the board, while sequential write speeds start at 3.9GB/s and top out at 7GB/s. In addition, the SSD uses a combination of 3D TLC and a Phison E18 controller, and is cooled via a low-profile graphene aluminium heat spreader.

As far as loading times and performance go, the KC3000 makes quick work of any programs, loading up instantly or near-instantly, taking mere seconds to fully load up, which is extremely useful for gaming or if you’re a professional trying to render CAD images or edit videos.

Like all Kingston storage products, the KC3000 also comes bundled with Acronis cloning software, which makes porting over your entire OS and settings from another storage component very convenient.

The only drawback to the KC3000 is its retail price. Pricing for the PCIe 4.0 SSD starts at RM499 for 512GB and goes all the way up to RM4664 for the top-of-the-line SKU, which has a 4TB capacity. Further, the only models that are able to consistently sustain an average of 7000MB/s for both sequential read and write speeds are the 2TB model, which is what I have for testing, and the 4TB. For the 512GB model, its sequential write speeds peaks at 3900MB/s, while the write speed of the SKU with 1TB capacity tops out at 6000MB/s. That said, it cannot be denied that those are all still considerably fast.

Given the gradual saturation of NVMe Gen4 SSDs on the market, I would definitely say that purchasing one of Kingston’s KC3000 SSDs would be a sound investment for years to come. However, I would recommend that, should you choose to purchase a unit, that you consider starting with the 2TB model, bare minimum. At RM1824 for the 2TB variant and comparing it to other SSD brands with identical capacities and similar sequential speeds, it is quite possibly the more bang-for-our-buck option.