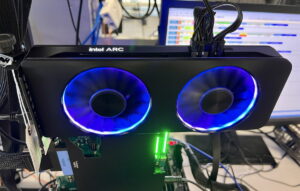 Intel announced today that it will be splitting its AXG graphics division into two separate groups, as it realigns the group in order to properly compete with the likes of the industry’s two GPU veterans, NVIDIA and AMD. At the same time, Raja Koduri, who currently resides as the Executive Vice President of Intel’s AXG business unit, will return to his previous role as Intel Chief Architect.

Through Intel’s division, the AXG graphics group will now comprise gaming and datacentre groups. In a Q&A with Tom’s Hardware, the chipmaker told the tech news portal that it still remains fully committed to its existing ARC roadmap, with its 2nd generation Battlemage and Celestial gaming GPUs still in the pipeline.

“Discrete graphics and accelerated computing are critical growth engines for Intel. With our flagship products now in production, we are evolving our structure to accelerate and scale their impact and drive go-to-market strategies with a unified voice to customers. This includes our consumer graphics teams joining our client computing group, and our accelerated computing teams joining our datacentre and AI group. In addition, Raja Koduri will return to the Intel Chief Architect role to focus on our growing efforts across CPU, GPU, and AI, and accelerating high-priority technical programs.”

Koduri first joined Intel back in 2017, after a stint with AMD’s Radeon graphics division when he oversaw the launch of its Polaris architecture in 2014, followed by Vega in 2017. With his return to the role of Intel Chief Architect, he is expected to work on high-performance technical programs that include a focus on the latter points that was mentioned in the chipmaker’s statement.

To that end, the gaming arm of the new Intel AXG gaming branch will be led by Lisa Pearce, known mostly for her work in leading the GPU team’s software and driver divisions. She will be reporting to Michell Johnston Holthaus, who serves as the current head of the brand’s Client Compute Group (CCG).

Intel’s launch of the ARC A-Series GPUs was, for lack of a better word, lacklustre. The ARC A770, A750, and A380 had very rough launches and while its parent company has made several improvements to their performance over the past several months, their performance levels are only on par with NVIDIA mid-tier GeForce RTX 30 series GPUs, at best.

Intel says it has learned its lesson and hopes that it can change the tides with its next generation ARC GPU, currently known by the codename Battlemage. To that end, many speculate that the 2nd generation GPU architecture will be its make-or-break point, and when the company will have to decide whether or not to continue down the path of graphics fidelity or to scrap its endeavour altogether.