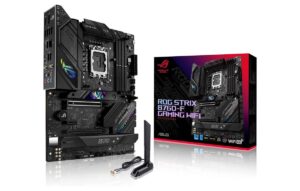 BoardChannels, a site dedicated to all the news and rumours surrounding the latest and upcoming motherboards, recently suggested that Intel’s upcoming 13th Gen mid-tier B760 motherboards will be arriving on 5 January. Additionally, the site also said that the average pricing of the new boards has increased by around 100 Yuan (~RM61).

The site (heads up, subscription needed) seems to suggest that the hike is the starting price, and that this will be for the cheaper, more budget-friendly B760 options of the series, while the more advanced models with more features and better power delivery will be anywhere between 200 and 300 yuan (~RM127 and RM190). Again, that average price hike will be higher than what the previous generation B660 models in the same category would cost.

It is somewhat important to note that BoardChannel’s report only addresses the B760 motherboards and to a lesser extent, the lower-tier B750 Series chipset. What it doesn’t address, however, is the pricing of the upper-tier H770 Series motherboards. Of course, it goes without saying that, unlike the higher-end and top-tier Z790 series, both the B-Series and H-Series motherboards will ship out with a reduced number of supported PCIe lanes and the absence of specific features, such as improved overclocking.

In regards to the B760 motherboard, rising hardware leakster chi11eddog (~g0ld3nm4ng0) managed to do a little bit of digging and managed to find what they say is the price range for MSI’s upcoming 13th Gen mid-range motherboards. According to the list, the cheapest on the list is a PRO B760M-A Wi-Fi DDR4, which retails for US$169 (~RM748), while the most expensive model, the MAG Tomahawk Wi-Fi, will retail for US$229 (~RM1014) when they become available on 5 January. In comparison, the MAG B660 Tomahawk Wi-Fi DDR4 currently retails around RM899, so that supposed increase in price is definitely starting to sound legitimate.