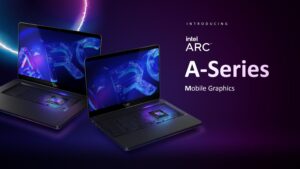 It’s been several months since Intel officially lifted the veil back from its ARC Alchemist graphics for the mobile space, with no more than the odd whisper or two about its mid-range and higher-end ARC 5 and ARC 7 discrete GPUs, respectively. That is, until now.

Thanks to the diligence of another popular hardware rumour monger, _rogame (@_rogame), it appears that benchmark numbers for the earlier mentioned GPUs and specifically, the A770M and A550M. To be even more precise, the performance metrics that were obtained came from UL’s 3DMark Time Spy test as well as Fire Strike Extreme.

Based on the 3DMark score sheet, the A550M scored an average 6457 points in Time Spy, while the A770M scored 8843 points in the Fire Strike Extreme test. Mind you, both discrete GPUs were tested with an Intel 12th generation Core i7-12700H mobile CPU, in order to keep the playing field fair. That being said, it is a little difficult to say that both GPUs are on par, given that the two 3DMark tests are vastly different from each other.

For all intent and purposes, and if one were to take these scores seriously, then the performance of the A770M is undoubtedly on par with NVIDIA’s own GeForce RTX 3070 Mobile for laptops; within the 3DMark benchmark score sheet, one can see that the RTX 3070 has an average graphic sore between 13300 and 13700. This is, in essence, a bit of good news for gamers, in the sense that if and when the discrete GPU finally makes its way outside of China later this year, it serves as another option, besides AMD’s own Radeon lineup.

That being said, it should also be noted that Intel had already confirmed its A770M’s performance back in June, claiming that it would be approximately 12% faster than even an RTX 3060 mobile.

For another matter, this is UL’s 3DMark tests that we’re talking about and traditionally, many non-NVIDIA GPUs within the top-end market have a tendency to be faster on a synthetic level but end up being slightly less deft in real-world gaming tests.