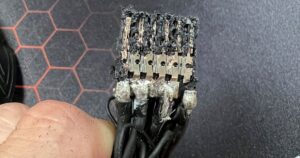 Earlier this week, complaints and reports about NVIDIA’s 16-pin PCIe Gen5 connector, or 12VHPWR adapter, melting from a power surge and in the process, killing the GeForce RTX 4090 cards they’re attached to, began to pour in over the internet. Fast forward to today and Igor Wallossek, the founder and owner of the Germany-based tech and review site, Igor’sLab, may have found out why that is the case.

Based on his teardown of the adapter, Wallossek’s initial stripping of NVIDIA’s 12VHPWR adapter shows what we can only describe as bush engineering or to put it in another way, makeshift electrical solution. As Wallossek unraveled the cable sleeves, a total of four thick 14AWG wires could be seen, soldered and distributed over a total of six contacts. Breaking it down further, two of the outer leads had been soldered to one pin, while the two leads in the middle were soldered to two pins each.

If that wasn’t bad enough, the solder on all bridges of the 12VHPWR was only 0.2mm thin copper bases, with a width of 2mm per incoming wire and 4mm for each of the middle connections. It is, as Wallossek puts it, a very “sporty” move, because just by carefully lifting up the barenaked wires off from the connected points would immediately cause the thin copper base to tear off.

Wallossek surmises that it is due to the latter issue occurring that the unfortunate RTX 4090 cards were sacrificed to the fire; because the connection between the wire and connector would become wobbly and unstable, its ability to properly regulate the amount of power that flows through the 12VHPWR adapter was thus compromised.

That being said, Wallossek appears to come to NVIDIA’s defense on the matter, stating that the GPU brand may not have been aware of the contact issue between the wire and base of its 12VHPWR adapter. It’s ironic, given that it was NVIDIA who had reported the initial “thermal variance” that it observed within the 16-pin connector to PCI-SIG, the governing body for all PCIe specifications in use today.

The good news is that the issue with the connection between the wires and connection bridges of the 12VHPWR adapter seems isolated to NVIDIA’s own 4x 8-pin adapter that comes with the RTX 4090. Defacto 12VHPWR cable that comes with newer ATX 3.0 PSUs, Wallosseks affirms, are not affected by this issue.

To that end, if you’re an individual that was fortunate enough to upgrade their PSUs to an ATX 3.0 version, we recommend using the dedicated 12VHPWR cable that comes with it. For that matter, NVIDIA has already started taking action, requesting all its board partners to recollect and send their RTX 4090 damaged by melted 16-pin connectors to its HQ. It also confirmed that it is “actively” investigating the problem.