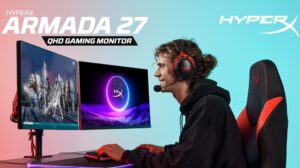 HyperX has always been a gaming subbrand that’s centered around peripherals. This was true even back in the days when it was still under Kingston ownership. Now under the wing of HP, it is announcing a new lineup of gaming monitors, called the HyperX Armada series. Two monitors currently make up the new Armada lineup, which are simply named after their display sizes. They are the HyperX Armada 25 and Armada 27.

Despite the name, the HyperX Armada 25 actually has a 24.5-inch Full HD IPS display. But defining its gaming chops is its 240Hz refresh rate and 1ms grey-to-grey response time. That, and the fact that it is Nvidia G-Sync compatible.

Then there is the HyperX Armada 27. This comes with a 27-inch QHD (1440p) screen, as well as a familiar 1ms response time. What this one has over its smaller sibling is Display HDR 400 certification. But as a tradeoff, refresh rate is down slightly to 165Hz, which is still plenty impressive.

The announcement of the HyperX Armada series of gaming monitors also sees the introduction of the Armada Single Gaming Mount. This allows monitors attached to it to be moved, tilted and rotated quite freely to basically any position you need them to be. Both monitors will come with one of these in the box.

HyperX monitors – of which there are only the two Armada models for now – can be attached easily with a snap. Other monitors will have to be attached with the VESA mounting plate. These can also be purchased separately, as can the Armada Gaming Mount Addon, for when you need more than one monitor on a single Gaming mount.