Alongside the new Mate50 and Mate50 Pro, Huawei also unveiled the nova 10 Series in Malaysia earlier this week. To be available towards the latter part of November, the series was originally launched in China back in July and is essentially aimed at the mid-range segment of the market.

On top of the list is the nova 10 Pro which pride itself in being the first-ever Huawei device to feature the 100W Huawei SuperCharge Turbo technology. The high-speed charging feature apparently allows the phone’s 4500mAh battery to go from 20% to 80% in just 10 minutes. When it comes to full charging time, Huawei said that it would take around 20 minutes. However, it is unknown at the moment if the 100W SuperCharge Turbo charger will be provided as standard in Malaysia since it is an optional accessory in certain markets.

Running on the 4G version of the Qualcomm Snapdragon 778G processor, the nova 10 Pro has also been equipped with a 6.78-inch Full HD+ OLED display that has a refresh rate of 120Hz. Other than that, it also carries a 50MP f/1.9 main camera and an 8MP ultra-wide camera that also acts as a macro camera.

A 2MP f/2.4 portrait depth sensor is also present on the nova 10 Pro’s rear camera module. For selfies, the phone relies on a combination of a 60MP f/2.4 ultra-wide autofocus camera and an 8MP f/2.2 portrait close-up camera. On the other hand, the standard nova 10 variant is almost a spitting image of its Pro counterpart. Powered by the same Snapdragon 778G processor and also features the same 50MP triple rear camera setup as well as its Star Orbit Ring design, the phone has been equipped with a smaller 6.67-inch display although it still has an OLED panel with Full HD+ resolution and 120Hz refresh rate.

The vanilla variant of nova 10 continues to offer a 60MP selfie camera but is not being accompanied by any secondary camera as per the Pro model. The phone also has a smaller 4,000mAh battery and its SuperCharge support maxes out at 66W.

As for the nova 10 SE, it has a different design language altogether as Huawei decided to implement flat edges for this particular model. Running on Snapdragon 680G processor, it has a 108MP f/1.9 primary camera alongside 8MP f/2.2 ultra-wide and 2MP f/2.4 macro cameras. A 16MP f/2.2 camera completes the phone’s photography hardware. The nova 10 SE also carries a 4,500mAh battery with support for a 66W SuperCharge charger just like its standard nova 10 counterpart. 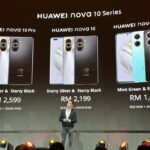 Pre-order customers for all three nova 10 Series devices will also receive rewards from Huawei Mobile Services. The new phones which come standard with 8GB RAM and 256GB internal storage will be available for pre-order from 12 to 17 November.