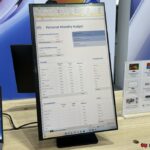 Huawei made a huge splash in Bangkok last week by launching a plethora of new devices for the Asia Pacific region. Five of them including the MateBook 16s, MateBook D16, MateBook X Pro (2022), MatePad Pro 11, and FreeBuds Pro 2 will be heading to Malaysia this month.

Alongside these five new devices, the company also launched the MateView SE monitor at the event. While it may be new for this region, the monitor has actually been released in Huawei’s native market of China back in May. As opposed to previous models such as the MateView 4K and MateView GT, the SE is a much more modest and straightforward release. Featuring a 23.8-inch IPS panel with native Full HD resolution and 92% screen-to-body ratio, the strength of SE generally revolves around its output quality.

Huawei said that the SE’s display panel has 90% P3 colour gamut coverage and 100% for sRGB. Each SE has also been factory-calibrated to deliver Delta E’s colour accuracy rating of under two and the monitor also comes with an eBook mode that simulates the colour output to mimic e-ink display which would help reduce eye strains from prolonged viewing.

Together with the support for AMD FreeSync technology, the SE can deliver a maximum refresh rate of 75Hz. The monitor’s simplicity is further highlighted by the lack of additional I/O ports as the SE only has one DisplayPort as well as one HDMI port.

Furthermore, the standard variant of the SE only supports backward and forward tilting. To have the ability to rotate its screen or tweakable elevation, one has to opt for the variant that has the adjustable stand.

Despite what is being mentioned on stage in Bangkok last month, Huawei has clarified to Lowyat.NET that the company has no plan to release the MateView SE in Malaysia anytime soon. Nevertheless, we will keep you posted if Huawei changes its plan for the monitor.