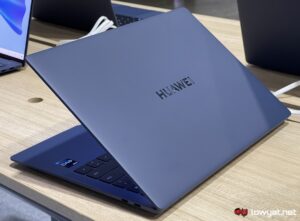 Mere weeks after the laptop was officially revealed for the APAC market, Huawei has recently announced the release date for the 2022 MateBook X Pro in Malaysia. If you can recall our previous report, we noted that the price tag would most probably be hefty.

Turns out, our prediction was right on the dot. That being said, the actual price tag blew out our expectations though as the new model is going to be released in Malaysia for RM9,999 which is an increase of more than RM3,000 when compared to the pricing of the 2021 model.

So, what are the differences between the two models that may have led to a significant increase in pricing? For starters, the 2022 MateBook X Pro is equipped with an Intel Core i7-1260P which is an upgrade over the Core i5-1135G7 that came with the 2021 model due to a higher number of cores, bigger cache, and faster clock speed.

The integrated Iris Xe Graphic within the 12th Gen Intel Core chip is also more powerful since it has more execution units and higher clock speed alongside the support for the newer HDMI 2.1 standard. The chip also enabled Huawei to implement native support for Thunderbolt 4 which can be accessed through two USB-C ports on the left side of the laptop.

On a related note, the 2022 model which is also an Intel Evo-certified release has gone full USB-C and does not carry USB-A as per its predecessor. Meanwhile, its wireless connectivity capability has been upgraded to support Wi-Fi 6E and Bluetooth 5.2.

When it comes to memory, the MateBook X Pro 2022 still carries 16GB of RAM but it utilizes the newer LPDDR5 module as opposed to the LPDDR4x inside the 2021 model. The new variant also has double the amount of storage space over its predecessor with the inclusion of 1TB NVMe PCIe solid state drive.

The 2022 model also has an increased number of speakers and microphones than its predecessor at six and four, respectively. When it comes to the webcam, the laptop still features a 720P HD camera though but at the very least, it is located just above the display as opposed to having a pop-up camera in the keyboard area as per last year’s model.

Huawei has also managed to shave more than 100 grams off the weight of the 2022 model which puts it at 1.26kg as opposed to the 2021 model which weighs 1.33kg. While Huawei didn’t reveal the battery life figures for the new laptop, there is a slight increase in battery capacity for the 2022 MateBook X Pro at 60W and it has also received a more powerful 90W SuperCharge charger.

Available from 19 August onwards, Huawei is offering two units of its Sound Joy wireless speakers for each early adopter of the new 2022 MateBook X Pro if they purchase the laptop by the end of this month. They can also expect to have the Office Home and Student 2021 pre-installed as standard on their new laptop.

The post Huawei MateBook X Pro (2022) To Be Available In Malaysia For RM9,999 appeared first on Lowyat.NET.