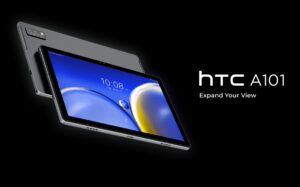 About a week after announcing its metaverse-oriented Desire 22 Pro smartphone, HTC has just recently revealed that it will soon launch a tablet as well. However, it’s best that you don’t get your hopes up as the newly unveiled HTC A101 is yet another entry-level device that is almost similar to its predecessor from last year, albeit featuring some minor improvements.

Like the HTC A100 before it, HTC’s latest tablet features a 10.1-inch 2.5D FHD display with 1920 x 1200 pixel resolution, surrounded by considerably thick bezels. Lacking a fingerprint sensor, biometric verification on the A101 is solely handled by its built-in AI Face-Unlock feature. Also onboard are dual stereo speakers, a USB-C port, and a 3.5mm headphone jack.

Managing both the tablet’s hardware and software is a 12nm Unisoc Tiger T618 chipset, paired together with 8GB of RAM and 128GB of ROM with expandable storage support of up to 256GB via microSD. It also comes with WiFi and Bluetooth 5.0 support, up to 4G LTE connectivity, and Android 11 out of the box. Power-wise, the new HTC A101 is equipped with a modest 7,000mAh battery capacity, but only features 10W charging via USB-C.

In terms of imaging, the tablet comes with a dual-camera setup on its back, which is pretty uncommon for smart devices of this category – a trait that its predecessor also had. The setup consists of a 16MP primary camera and a 2MP ultra-wide sensor, which is a slight upgrade over the A100’s 13MP + 2MP combo. Meanwhile, situated on one side of the display’s bezel is a 5MP front-facing camera.

The new HTC A101 is slated to first launch in South Africa, though its pricing or date of availability has not been confirmed at this time. As for colour selection, the company is offering the tablet in either Grey or Silver options. It is not known whether the product is planned to be released in other regions.