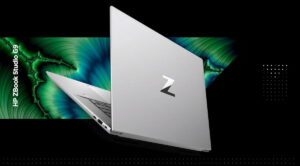 HP Malaysia today has announced that the new HP Zbook Studio G9 is set to arrive locally later this month. As implied by its name, the new laptop is intended to be a portable workstation for creatives, while at the same time featuring powerful hardware and cooling for intense gaming.

The HP Zbook Studio G9 sports a 16-inch HP DreamColor display with 16:10 aspect ratio, 100% DCI-P3 colour gamut, 120Hz refresh rate. Alternatively, there’s also an option to switch to a 16-inch OLED touchscreen or the privacy-focused HP SureView Reflect display. The laptop pretty much retains most of its predecessor’s design, complete with an all-aluminium chassis with MIL-STD 810 durability. Weight-wise, the company says the new laptop comes in at around 1.73 kg.

Under the hood, the Zbook Studio G9 features up to an Intel vPro platform with 12th Gen Intel Core i9 processor, as well as up to an NVIDIA RTX A5500 or a GeForce RTX 3080 Ti laptop GPUs. Paired together with your choice of CPU and graphics card are up to 64GB SODIMM DDR5 RAM and up to 4TB of storage via NVMe SSD. Meanwhile, keeping its internals’ temperatures in check is a cooling system which consists of a vapour chamber as well as dual two-sided vents with curved metal fans. HP touts the new laptop to be both ISV-certified and VR compatible, regardless of your desired spec choice.

Also onboard is the brand’s Z Command Keyboard feature that replicates a Mac layout, HP QuickDrop file transferring capability, support for Wi-Fi 6E connectivity, and a choice of either Windows 11 or Ubuntu Linux operating systems. Besides that, the laptop is equipped with Bang & Olufsen tuned speakers, built-in microphone with AI noise suppression, a RGB backlit keyboard that can be customised via HP’s Z Light Space app, and a built-in Tile feature to help you keep track of the device’s location.

HP has yet to confirm the exact release date and pricing of the upcoming Zbook Studio G9. As mentioned earlier, the company officially confirmed that the laptop will eventually arrive in the Malaysian market within this month.