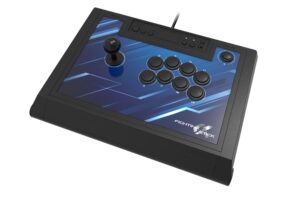 The PS5 doesn’t yet have any exclusive fighting games, with most games in the genre having been launched on the PS4. But that hasn’t stopped peripheral brand Hori from announcing both a new arcade stick and a new controller for the new generation console.

Starting with the arcade stick, the Hori Fighting Stick Alpha, this comes with all the usual perks of a customisable arcade stick. By default, it comes with the brand’s own Hayabusa lever and buttons, with the latter being programmable. The artwork on the top plate is also interchangeable. Though it’s worth noting that the Fighting Stick Alpha series is not exactly new, with a previous entry for both the Xbox One, as well as the Xbox Series X and S.

In the same vein, the Fighting Commander OCTA for the PS5 is also not exactly new, as it has another entry for both Xbox generations of consoles. But for what it’s worth The difference in button layout makes it worth the distinction.

The Fighting Commander Octa comes without the right analogue stick, but it puts the two right shoulder buttons next to the existing face buttons. It also sports an eight-way D-pad, which makes quick diagonal inputs a lot more reliable. In a sense, there’s a lot of comparisons to be made with the Razer Raion.

The Hori Fighting Stick Alpha is priced at US$199.99 (~RM838), while the Fighting Commander Octa comes with a US$59.99 (~RM252) price tag. That being said, the company doesn’t have a release date for either peripheral just yet.