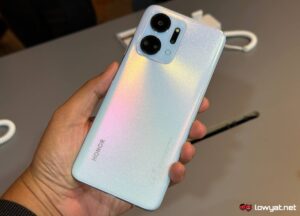 In addition to the X9a 5G, HONOR has also rolled out another new phone in Malaysia called the X7a. In general, what you are looking at here is a budget HD phone with an emphasis on high-resolution imagery and battery life.

Powered by the MediaTek Helio G37, the Malaysian variant of X7a comes standard with 6GB of RAM and 128GB internal storage alongside the support for a microSD card with a capacity of up to 1TB. The new phone also carries a 6.74-inch IPS display that has a 90Hz refresh rate and a native resolution of 1600 x 720.

On its back, the new HONOR X7a features a 50MP f/1.8 primary camera which is accompanied by a 5MP f/2.2 wide-angle camera, 2MP f/2.4 macro camera, and 2MP f/2.4 depth camera. For selfies, the phone relies on an 8MP f/2.0 camera that is located within the teardrop notch on the top of its screen.

Powering the phone is a massive 6000mAh battery that HONOR claimed can deliver up to 3.5 days of battery life. When it comes to continuous usage, the company said that the X7a can withstand up to 22 hours of online video playback, 29 hours of music playback, or 42 hours of social media.

A 22.5W HONOR SuperCharge charger is provided to X7a as standard although the phone’s exact charging time was not provided by HONOR. Nevertheless, the company did that users can gain back 3 hours of video playback time just by charging the phone for 10 minutes.

Available in Titanium Silver, Ocean Blue, and Midnight Black, the new HONOR X7a can now be obtained through HONOR Malaysia’s online store for RM 799 just like the equally new, higher-end HONOR X9a 5G. Protected by an extended 1-year warranty on top of the standard 1-year warranty policy, both phones are also readily available through HONOR Store outlets and authorized dealers across Malaysia.