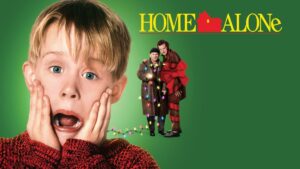 Every Christmas, some of us ring in the holiday by watching a movie that celebrates the season. For some of us, that movie is Die Hard – yes, it is a Christmas movie and that is a hill I will die on – but for the majority of folks around the world, it is that 1990 classic of child negligence, Home Alone.

According to TorrentFreak, the blog that follows the trends for BitTorrent, Home Alone was the most pirated and downloaded Christmas movie this year, followed by its sequel, Home Alone 2: Lost in New York. The two movies beat out The Grinch, Elf, and How the Grinch Stole Christmas, but for the record, they were the top five movies torrented.

For those of you who have been living under a rock and don’t know what Home Alone is, here’s a quick synopsis: the movie was first released in theatres in 1990. It centres on a young boy named Kevin McCallister, played by Macaulay Culkin, who is accidentally left home alone, hence the title, when they leave for a family vacation to Paris on Christmas. It’s not all fun and games for Kevin, however, as he soon realises that he has to defend his home from two bumbling burglars, played by Joe Pesci and Daniel Stern.

Home Alone was a box office hit and earned its studio more than US$476.7 million (~RM2.1 billion) during its running and even launched Culkin’s acting career. The movie franchise did spawn several more sequels after the second one, but those didn’t bring back Culkin and as it stands, the majority of them were straight-to-video releases. Worse still, they couldn’t hold a candle to the cult following that Culkin has culminated as McCallister.

For the record, we’re not condoning, nor are we encouraging our readers to illegally download Home Alone or any other movie, for that matter. However, if you suddenly feel the urge to watch the movie, the movie is available for viewing on Disney Hotstar.

The post Home Alone Is This Year’s Most Pirated Christmas Movie appeared first on Lowyat.NET.