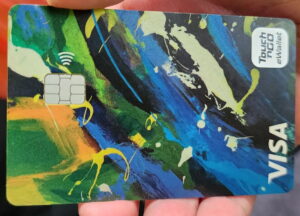 After it was first announced back in October 2021, official information regarding the Touch n Go Visa prepaid card was generally non-existent. However, the card suddenly came under the limelight again after snippets of questions and answers from its FAQ document temporarily appeared on TNG eWallet Help Centre.

That seems to signal that the TNG Visa card might finally be ready for consumers. Now, here comes an even bigger sign: the actual physical card itself, as shared with Lowyat.NET by an anonymous tipster.

As you can see from the image above, TNG has opted for a colour splatter artwork for its new Visa card. Just like the Enhanced TNG NFC card, it also carries the TNG eWallet logo which is likely meant to signify its tie with the fintech platform.

Inside TNG’s October 2021 announcement, the company already noted that TNG eWallet users will be able to the wallet’s cashout feature through the Visa card as it will allow them to access Visa-enabled ATMs all over the world.

However, the usual TNG logo is missing from the new Visa card though. We have been hearing whispers that the TNG Visa card would not support toll or parking payments as per traditional TNG card but without official acknowledgement from the fintech company, we can’t be certain of it just yet.

The same also applies to the artwork that we have seen in the image above as we have no knowledge of whether the card’s design has been finalized or otherwise. TNG has previously said that it aimed to launch the TNG Visa card within 2022 which means the company have to launch the card next week if they want to meet its original target.

However, we don’t expect the TNG Visa card to be launched so soon though. Nevertheless, let’s see what will transpire in the next few days.

The post Here Is Your First Look At The Touch n Go Visa Card appeared first on Lowyat.NET.