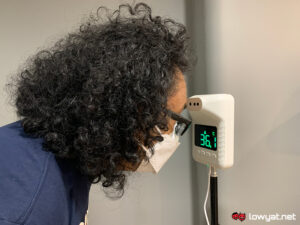 Health Minister Khairy Jamaluddin has announced that the Ministry of Health (MoH) has decided to endorse the removal of temperature checks from the current COVID-19 SOPs. Once the amendment is officially made to the SOPs, it will no longer be mandatory for premises to be equipped with temperature screening devices.

For the past two years, the general public health protocol for Movement Control Order and National Recovery Plan stated that all premises must implement temperature checks as a precaution, given that one of the most common symptoms of COVID-19 infections is a fever. Under the stipulated SOPs, any individuals with temperatures above 37.5C are not allowed to enter the premises.

Premise owners still need to check the vaccination status of their patrons as noted in MySejahtera. Of course, you also still have to perform the MySejahtera QR check-in at all of the premises that you visited.

The SOPs will be updated soon during the next ministerial quartet meeting to reflect this policy change. As for the reasoning behind the SOP change, Khairy clarified that MoH found that temperature screenings don’t have any effect on curbing COVID-19 infections.

“The advice is that if you are unwell or showed symptoms, don’t go out. We don’t need to test everyone’s temperature anymore,” says the minister during today’s media Q&A session at Parlimen Malaysia. He further added “You can be sick and not have COVID. It doesn’t prove that you have COVID. I think we have reached the stage where we can do away with it.”

Interesting enough, Khairy has also revealed that MoH will also recommend National Security Council (MKN) discontinue the usage of logbooks in which the public can manually write down their details instead of performing QR check-in via MySejahtera. “I can tell you, we don’t use the books for contact tracing,” quipped the minister.

Aside from vaccine status verifications and MySejahtera QR check-in, other SOPs for premises such as wearing masks and social distancing will remain in place. He also reminded users to turn on the new MySJ Trace feature on MySejahtera when in indoor spaces.