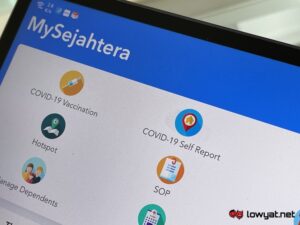 Health Minister Khairy Jamaluddin has insisted that the MySejahtera data has been under the Ministry of Health’s administration since the first day of it being used as the national COVID-19 app. In a statement released earlier today, he also said that the app’s data confidentiality is guaranteed by MoH.

As the data management and usage have to adhere to international standards as well as the Prevention and Control of Infectious Diseases Act (Act 342) and Medical Act 1971, MoH is not allowed to share MySejahtera data with any government agencies and private companies according to Khairy.

Furthermore, no payment has been made to the original developer of the app, KPISoft who has changed its name to entomo. This is because the company has deemed the app as a part of its corporate social responsibility (CSR).

That being said, the CSR agreement has since expired at the end of March 2021. Back in September last year, Prime Minister Ismail Sabri Yaakob has revealed that the government is finalising the payment to the developers of MySejahtera after it decided to continue using the app upon the expiration of the CSR agreement.

In general, the statement by Khairy was a response to the speculations regarding the ownership of MySejahtera that have been raised by the public for the past few days including the current Leader of the Opposition in the Dewan Rakyat, Anwar Ibrahim.

The reaction itself was generally triggered by new information revealed in the report released by the Parlimen’s Public Accounts Committee (PAC) on 24 March [pdf]. The particular report revolves around the follow-up actions that MOSTI, MoH, and MoF need to take in regards to the recommendations that PAC has presented at the Dewan Rakyat in December 2021.

One of PAC’s major concerns that were highlighted by the report is related to a company called MYSJ Sdn Bhd which apparently has received the development rights to MySejahtera from KPISoft. The committee said that appointment through direct negotiation should not be given to a new company and MoH should follow proper procurement procedures if it wants to appoint other companies than KPISoft in regards to MySejahtera.

The post Health Minister: MySejahtera Data Is Under MoH’s Administration From Day One appeared first on Lowyat.NET.