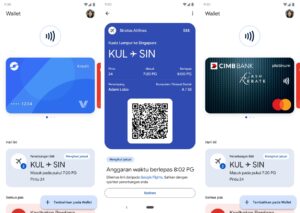 After what seems to be an eternity, Google is finally making its digital wallet, the self-named Google Wallet, available in Malaysia. Starting today, consumers with accounts at selected banks will be able to make use of the digital service.

For those of you wondering which banks will be given access to Google Wallet, the list includes CIMB, Hong Leong Bank, Hong Leong Islamic Banks, Public Bank, HSBC, and HSBC Amanah. Before you get excited, do note that depending on your bank, you will only be able to use certain cards on the digital wallet.

Moving on, Public Bank customers will be able to store both Visa credit and debit cards, but not Mastercard on Google Wallet. For HSBC and HSBC Amanah card-carrying customers, the service is extended to the Visa and Mastercard credit cards. Once stored, the digital wallet will keep your credit and debit card details secure via the use of an tokenisation method, whereby transactions are made via an alternate card number that is device-specific, and changes its security code with each transaction. Oh, and like all digital wallets, customers will only need to verify the cardholder before it can be added to an Android device.

In its current state, Google Wallet can also be used for more than just storing credit and debit cards; it can also be used to store flight tickets, or boarding passes. On that note and as of today, the search engine will be allowing consumers flying on AirAsia flights to store their boarding passes on it, with plans to also allow passengers flying on Malaysia Airlines to do the same. Through Google Wallet, passengers will automatically be informed of changes to departure time and gate changes, a feature that you’ll only currently find on the search engine’s digital wallet.

More to the point, Google Wallet’s availability in Malaysia means that consumers will now be able to make contactless payments via Android OS and Wear OS. On that note, you can download the app via Google Play.