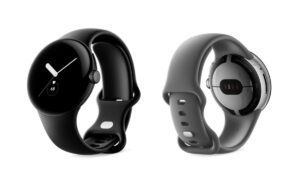 Google first showed off the Pixel Watch back in May during its I/O event. But it was only recently, alongside the Pixel 7 smartphones, did the company fully pull the veil off of its smartwatch.

Previously, we’ve seen what the Google Pixel Watch looks like, and it’s no real surprise that nothing has changed since on that front. But at least now we have detailed specs figures to attach to them. For the screen, we’re looking at a 1.2-inch display, with a 1000nits peak brightness, as well as an always-on model. The glass on top is Gorilla Glass 5, with curved edges giving the whole thing a dome-like shape.

Inside, the Google Pixel Watch packs a heart rate sensor and an ECG sensor for, well, heart readings. For its chipset, it’s running a Samsung Exynos 9110, just as the rumours from just after I/O suggested. Alongside those are 2GB of RAM, and a battery that the company claims can last 24 hours.On the software side of things. it will be running Wear OS 3.5.

All of this is packed tight inside a 41mm body that’s rated at 5ATM water resistance. Which also means that you can safely wear it for a swim. The Pixel Watch also shows a pretty unique method of attaching the body and its straps, which looks like it will reduce instances of the two detaching by accident.

Google is giving the Pixel Watch two variants, one with only WiFi, and another with LTE. The former is priced at US$350 (~RM1627), while the latter comes with a US$400 (~RM1859) price tag. Unfortunately, just like the Pixel 7 phones, the internet search giant is not bringing the Pixel Watch over to our shores. But unlike the phones, popping over to our neighbour down south does not appear to be a simple alternative to getting your hands on this smartwatch.

The post Google Pixel Watch Launches With Prices Starting From US$350 appeared first on Lowyat.NET.