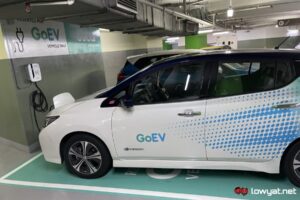 GoCar Malaysia launched its GoEV service back in early December 2021 which provides a rather convenient way for consumers to test out an electric vehicle via the car-sharing model. To celebrate the service’s first anniversary, the company will be offering a 70% discount for bookings next week.

Specifically, the discount can be applied by using 1STGOEV as the promo code is available only for bookings made from 12 to 15 December 2022. That being said, the booking can be performed for journeys dated 12 December 2022 up to 31 January 2023.

However, do note that the discount is capped at RM80. As part of the celebration, GoCar is also giving away 100,000 GoPocket Points which are valued at RM1,000 to 10 lucky GoEV customers.

Since GoEV was made available to consumers a year ago, more than 1,000 users have picked up the service according to GoCar. The company also said that GoEV was their first experience with an all-electric vehicle for more than 90% of them and together, they have an accumulated mileage of more than 500,000km.

GoCar is still working to make GoEV available in more places although it seems that the expansion is a bit more modest than what we have been told before back in March. Nevertheless, more than 30 units of Nissan Leaf will be added to the GoEV fleet soon to increase the number of vehicles in the fleet to over 50 units.

The GoEV rental rate is currently still the same at RM24.90 per hour or RM249 per day although those who opted to book GoEV service for one month or more will be charged RM232 per day instead. For customers that are looking into a long-term rental instead, GoCar also provides Hyundai Kona Electric as another option in addition to its existing Nissan Leaf as part of the GoCar Subs subscription program.

The post GoCar Offers Up To 70% Discount For GoEV’s 1st Anniversary Celebration appeared first on Lowyat.NET.