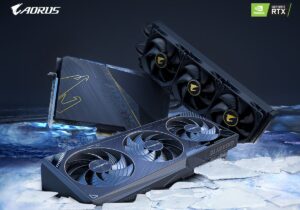 With the NVIDIA GeForce RTX 3090 Ti now official, the GPU maker’s AiB partners have understandably begun coming out to play with their own iteration of the card. First on today’s list is Gigabyte, along with both air-cooled and water-cooled solutions for the GPU.

For those among you that are simply content with an air-cooled variation of the RTX 3090 Ti, Gigabyte is offering its triple-fan design Gaming series model of the card. It features the brand’s patented WINDFORCE 3X cooling system that includes three alternate spinning 3D Active Fans, eight composite copper heat pipes, and vapour chamber. In addition, this lineup is available in two flavours, which is the standard Gaming edition and the Gaming OC edition.

Moving up the ladder and for the PC gaming enthusiasts that favours the power of water cooling, there is the AORUS Xtreme Waterforce of the RTX 3090 Ti. As the name implies, this version of the card has the entirety of the PCB covered with a waterblock that in turn, is attached to a large 360mm radiator, cooled by three 120mm double ball bearing fans. That, and the entire PCB is covered by a very large and stylish black copper plate.

Thanks to this cooling solution, Gigabyte is able to ratchet up the boost clocks of the RTX 3090 Ti from the default 1.86GHz to 1.94GHz.

Regardless of design, all versions of these RTX 3090 Ti feature the same 24GB GDDR6X graphics memory running at 21Gbps, 10752 CUDA cores, 78 RT-FLOPs, 40 Shader-TFLOPs, 320 Tensor-TFLOPs of power, and almost 1TB/s of memory bandwidth across a 384-bit bus. It also has a 450W TDP and uses a new 12-pin Microfit MOLEX PCIe power port, which will require 3-PCIe connectors, in order to run.

As for the cost of these cards, pricing starts at RM9699 for the standard Gaming RTX 3090 Ti, RM9999 for the Gaming OC RTX 3090 Ti, and RM10299 for the AORUS Xtreme Waterforce version of the card. Regarding availability, Gigabyte says that the cards will be available to the masses starting next week, although no specific date has been given.