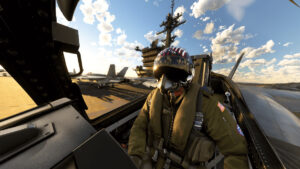 Looks like Ace Combat 7 isn’t the only video game to feature collaborative content from Tom Cruise’s latest film, which finally hit theatres worldwide after a long delay. Around the same time as the movie’s release, Microsoft and Asobo Studio has announced that its own Top Gun: Maverick expansion is now available for Microsoft Flight Simulator. Furthermore, fans and enthusiasts alike will be glad to know that the new content can be downloaded completely for free.

Speaking of which, the Top Gun: Maverick update for Flight Simulator packs a decent amount of content for users to enjoy. These include several training and challenge missions, the obligatory Maverick livery for the in-game F/A-18E Super Hornet, and a new “never-before-unveiled” hypersonic aircraft that can “attain speeds of Mach 10 and altitudes greater than 150,000 feet above sea level.”

Unfortunately, the classic Top Gun livery for the Grumman F-14 Tomcat is not included in the package due to a very valid reason: the iconic plane itself isn’t officially included in Flight Simulator. However, this can easily be remedied by downloading approved custom but unofficial versions created by the game’s community.

According to Flight Simulator’s official website, the Top Gun: Maverick DLC offers players with three training missions for the Super Hornet that lets them master several flight manoeuvres, as well as six challenge missions that involve canyon traversals, carrier deck landing and more. Additionally, there’s also one mission that is unique to the new hypersonic aircraft which lets you fly to the earth’s stratosphere.

Granted, this version of the Top Gun: Maverick downloadable content lacks the extra planes that are offered in the Ace Combat variant, but the included missions and challenges are substantial enough to set it apart from the latter. And most importantly, Flight Simulator’s pack is free to download from its official website, whereas its counterpart on the Bandai-Namco game will cost you RM79.