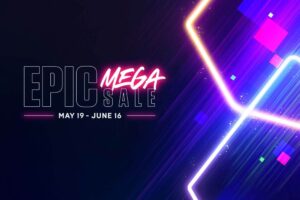 If you’re fine with the idea of having more than just a handful of video games launchers installed on your PC, then chances are you already have the Epic Games Store launcher installed. If you do, then you should probably capitalise on the ongoing Epic MEGA sale, that runs all the way up to 16 June.

In the usual Epic Game Store sales fashion, games have their own discounted prices, and you can apply an unlimited discount coupon on top. Though it’s a little different this time around. Previously, coupons have a flat US$10 price cut, but now, it’s a 25% discount rate, on top of whatever discount a game already has.

Some old restrictions apply, such as a game must be priced at US$14.99 or higher after discounts for the coupon to apply. But since the coupon is percentage-based this time, you’ll be saving more by buying more expensive games anyway. Coupons are automatically applied where applicable, so there’s no need to worry about going through extra clicks for that. These also don’t apply to microtransactions like the buying of Fortnite V-Bucks.

Alongside discounts, the Epic MEGA Sale also has what the company calls the Epic Vault. This is basically a fancy way of saying the company is giving away one free game every week for the duration of the sale. And the first game on the list is Borderlands 3.

As Epic Games highlights, some of the deals to be had here include Far Cry 6 and Final Fantasy VII Remake Intergrade. The former has a base discount of 50% across all editions, which brings the final discount up to 75% with the coupon. As for the latter, the base discount is at 29%, which means you can get it for just slightly under half its usual price of RM299.

The post Epic MEGA Sale 2022 Is Ongoing Until 16 June appeared first on Lowyat.NET.