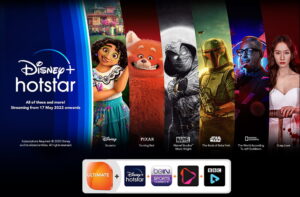 TM has announced that Disney+ Hotstar will be made available as part of unifi TV offerings starting from 17 May onwards. There are several ways for unifi customers to obtain access to the streaming service but the most direct way is through the unifi TV Ultimate Pack.

For those who are not familiar with the pack, it is essentially the highest-end unifi TV package around as it provides access to channels and streaming apps that unifi TV has under its wing. Currently priced at RM60 per month, existing unifi customers that sign up for this package will also be provided with an unifi Plus Box although it is unclear whether they will be provided with the original box or the second-generation model.

On another hand, unifi TV Varnam Plus, Aneka Plus, and Ruby Plus Pack subscribers can also add Disney+ Hotstar into their pack for an additional RM16 per month. Not to forget, unifi Home customers that didn’t subscribe to any of the unifi TV packs can also sign up for Disney+ Hotstar although the price is still RM54.90 for 3 months which is the standard pricing for the service.

That being said, some may want the convenience of paying the fee through a single unifi bill which is why TM is offering the option. Meanwhile, TM will also be providing a 6-month trial for Disney+ Hotstar to new customers that signed up for the unifi Home 100Mbps plan.

For existing unifi TV Ultimate Pack subscribers out there, you will be able to access Disney+ Hotstar without additional costs. However, you have to pre-register yourself at this particular website ahead of the activation day.

The announcement by TM today is certainly a long time coming as it validates the rumour that we have heard back in May 2021. On a related note, there is still no sign of Netflix’s arrival on unifi TV which is something that some of us have been waiting for since as early as July 2016.

The post Disney+ Hotstar Is Coming To unifi TV This May appeared first on Lowyat.NET.