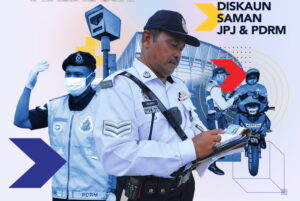 In conjunction with the 100-Day Aspirasi Keluarga Malaysia programme that is taking place at the KL Convention Centre for the next four days, the Royal Malaysia Police (PDRM) is offering up to 80% discounts on unpaid summons. A similar offer has also been announced by the Road Transport Department (JPJ).

The public doesn’t have to go all the way to KL Convention Centre to take advantage of the offer as it still applies for payments through PDRM and JPJ online platforms, MyBayar Saman and MySikap, respectively. That being said, the response from the public is apparently quite overwhelming to the extent that it has brought both platforms down to their knees throughout the day.

This was acknowledged by PDRM through a statement by CP Mat Kasim Karim, the Director of Traffic Investigation and Enforcement Department (JSPT) that was posted on its Facebook page late this afternoon. Through the statement, CP Mat Kasim has also advised the public to try accessing MyBayar Saman again during off-peak hours since the platform is open 24 hours.

On another hand, JPJ has yet to release any statement regarding the prolonged downtime faced by MySikap with the exception of this Facebook post that was published at 1:37 PM to inform the public that the platform is experiencing high traffic. Meanwhile, the site is still inaccessible when we visited it at 8:38 PM:

For those who are wondering, you can still obtain the PDRM’s discount by visiting the nearest district or state contingent police headquarters until this Sunday. As for JPJ summons, you can check out JPJ and UTC branches throughout the country.

The post Discount Offer Brings MyBayar Saman and MySikap Down To Their Knees appeared first on Lowyat.NET.