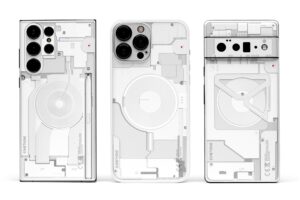 The Nothing phone (1) has, if anything, an interesting look to it. Even if you remove the standout LED lights at the back, there’s still this industrial-esque look to it. If you like your phone to look like that, then Dbrand has some phone cases and skins for you.

And this time, the source of inspiration for its new line of products are very obvious. Called the Something series, it consists of skins and casings made to imitate the Nothing phone (1) in design. There’s a lot of wordplay involving the names, but then again, a brand name like Nothing is just begging for these puns. Even in the office we had expressions of thanks sound like insults just because of the name.

But back to the Dbrand Something accessories. Unfortunately, the initial run of skins and cases are only available for three flagship devices. They are the iPhone 13 Pro Max, the Samsung Galaxy S22 Ultra, and the Pixel 6 Pro. That last one isn’t even available in the country. Skins are priced ad US$24.95 (~RM111), while cases come with a US$49.90 (~RM222) price tag.

According to The Verge, there are plans to make a Something product for the Nintendo Switch, which is interesting. But for phones, skins and cases for other devices “will come based on demand”.

If you’re not familiar with the name Dbrand, then the only reminder you’ll probably need was that it made face plates for the PS5, and got into legal trouble for its earlier designs. Naturally, it makes accessories for other things too, from the Nintendo Switch to phones. It’s also known for its provocative taglines, from “go ahead, sue us” and “checkmate, lawyers” for the PS5 face plates to now “it’s better than nothing” in reference to both the brand and its Something line.

(Source: Dbrand via The Verge)