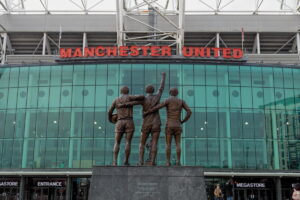 One of the biggest football clubs in the world, Manchester United is currently up for sale at the moment. Immediately after the official announcement earlier this week, the rumour mill is running rampant with whispers of names that could be the club’s possible suitors which, interesting enough, also include Apple.

While it may sound odd that a tech company would be interested in buying a football club, Manchester United is not exactly foreign to the tech industry. The club currently has several tech companies as its partners including TeamViewer, Tezos, DXC Technology, and Qualcomm.

Furthermore, Apple doesn’t really have a problem coughing up the money required to acquire Manchester United. According to its latest financial results, the company’s recent annual revenue stands at around GBP 325 billion (~RM 1.75 trillion) which is way higher than the club’s alleged asking price of between GBP 6 to GBP 8 billion (~RM 32 to 43 billion).

There is one problem with this rumour though: it came from the British tabloid Daily Star. The newspaper even claimed that Manchester United would build a new cutting-edge stadium if the club is acquired by Apple.

So, it is not exactly a reputable source but that did not stop many from being excited by the prospect of having Apple as Manchester United’s new owner. After all, many of the club’s fans were already weary of the Glazer family’s ownership who acquired Manchester United 17 years ago.

That being said, it is quite possible that the acquisition would remain as another tabloid rumour. Citing an insider source, MacRumors has noted that Apple has no plan to make Manchester United part of the company.

Given that there is no official indication from Apple itself as well as the general unreliability of British tabloids, the acquisition seems a little bit far-fetched at the moment. There are plenty of other ways that Apple could consider if it really wants to invest in Manchester United such as a content partnership for Apple TV but a straight-out acquisition really seems out of character for the Cupertino giant.

The post Could Apple Become The Next Owner Of Manchester United? appeared first on Lowyat.NET.