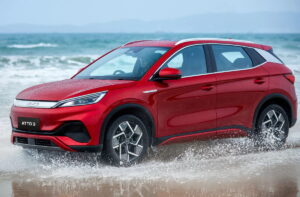 The electric vehicle segment in Malaysia has been dominated by luxury models mainly from European manufacturers but things have begun to change as you can now slowly see the release of sub-RM200k EVs into the market. The list is being expanded once again today with the official Malaysian launch of the BYD Atto 3.

In our market, BYD which stands for Build Your Dreams is under the responsibility of Sime Darby Motors (SDM) who signed the distribution agreement with BYD Auto back in late September. Ahead of its first public consumer test drive event in Bandar Malaysia this weekend, BYD and SDM have officially revealed the much-anticipated local price tag for Atto 3.

For the Standard Range variant which can travel up to 410km according to the NEDC standard, it is priced at RM149,800. On the other hand, the 480 km Extended Range option can be obtained for RM167,800.

As noted in our previous report, the Atto 3 Standard Range has a battery capacity of 49.92kWh while the Extended Range variant features a 60.48kWh battery. Both of these variants are powered by the proprietary BYD Blade Battery which has lithium-ferro phosphate battery cells.

When it comes to charging time, it is up to 9.5 hours for AC charging or 1.2 hours through DC charging. In terms of powertrain, both the Standard and Extended versions are running on the same 150kW electric motor with a front-wheel drive setup that can deliver 201 PS of power together with a maximum torque of 310 Nm.

The Atto 3 also comes standard with a motorized 12.8-inch infotainment display that can switch from landscape to portrait orientation and vice-versa as well as a 5-inch digital instrument panel for the driver, and  NFC key card. While the Standard Range has a 6-speaker audio system, the Extended Range was equipped with an 8-speakers Dirac HD Sound system instead together with multi-colour ambient lighting that follows music playback.

To learn more about the new EV from BYD, head on to its Malaysian website right here. Meanwhile, BYD Malaysia is also planning to roll out another EV soon into the country in the form of E6 which is also featured on the website although the launch date was not announced today.