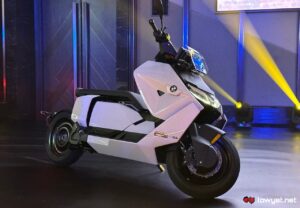 BMW is one of the pioneers when it comes to electrified vehicles here in Malaysia although that mainly applies to its four-wheel releases. Now, the German marque has officially expanded its EV offerings to include a two-wheel model in the form of the BMW CE 04.

As noted by its name, this fully electric scooter is being positioned together with the brand’s existing C Series electric mobility offerings. In fact, the “04” in the name is a reference to the 400cc scooter market segment which BMW Motorrad Malaysia currently caters to through the C 400 X and C 400 GT.

Despite the relation to the 400cc class, BMW Malaysia has confirmed to Lowyat.NET that owners don’t need to own a B full licence to ride the bike. In other words, you can legally drive the electric scooter with just a B2 (<250cc) licence.

With a design that reminded us of Bulma’s motorcycles from the Dragon Ball series, the CE 04 is equipped with an 8.9kWh lithium-ion battery that can be charged through a Type 2 connector. This means owners can actually charge it at EV chargers that are usually used by cars and the bike takes around 1 hour 40 minutes to be charged with a 6.9kW charger or 4 hours 20 minutes through a 2.3kW charger.

Running on a 31kw electric motor that has a maximum torque of 62Nm and is linked to the rear wheel with a toothed belt drive, the electric scooter has a maximum speed of 130km/h and can go from 0 to 50km/h in 2.6 seconds. When fully charged, the CE 04 can travel up to 130km.

Owners are able to ride the CE 04 in three different ride modes including Eco, Rain, and Road. Naturally, Anti-Lock Brake System is a standard on the bike as well as Automatic Stability Control.

BMW Malaysia did not reveal an exact release date for CE 04 at its launch event today though. The same goes for the price tag but the Managing Director of BMW Group Malaysia, Hans de Visser has noted during the media Q&A session that the estimated price is around RM60,000

This is a developing story. Please refresh this story for the latest information as well as more live images of the new BMW CE 04 as we go through its official Malaysian launch event.