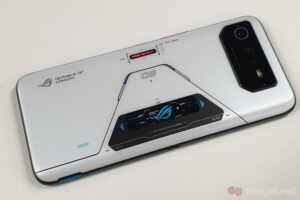 Mobile gaming, despite all its recent misgivings, is still going strong. Which has allowed for phones made specifically for mobile games like the ASUS ROG Phone 6 to continue being made. This naturally brings us to the review of said phone and more specifically, the Pro version of it.

That being said, as mentioned previously, the only real difference between the base and Pro models are the RAM and storage capacity, as well as the ROG Vision display at the back. So you can, to an extent, also treat this as a review of the base unit.

As a gaming phone, you expect the ASUS ROG Phone 6 Pro to come packed with the most powerful mobile chipset available. And it has just that, in the form of the Qualcomm Snapdragon 8+ Gen1. And as mobile gaming these days also venture into the excessive frame rate territory, it also has a display that supports not just a 165Hz refresh rate, but also a 720Hz touch sampling rate.

Phones these days swing pretty wildly between discreet and gaudy. Gaming phones trend toward the latter, and the ASUS ROG Phone 6 Pro is far from being the exception if you were looking for one. That being said, it does have the right touches to evoke futuristic themes when you look at it. The additional ROG Vision display helps on that front, but it’s definitely giving the phone more style points than substance.

The rear cameras sit on an island on the back. While it looks pretty large on its own, the setup is actually pretty modest when compared to those found on other devices out there in the market right now. The island itself is also shaped in a way that matches the overall futuristic aesthetic of the phone.

Beyond the back of the phone, you’ll find most of the usual trimmings that you’d expect from a smartphone. The power and volume button is on the right, the SIM tray on the left, and the USB-C port on the bottom. But beyond these standard inclusions, there are a number of extras that remind users that this is a gaming phone. One is the fact that it still has a 3.5mm audio jack. As strongly as wireless headphone makers may advertise, there’s still nothing quite like having a wired connection in games where audio delay is a major disadvantage.

You’ll also notice that the phone doesn’t have a notch or punch hole cutout, with the front-facing camera and the notification LED sitting in a good old top bezel. This works in the favour of the ASUS ROG Phone 6 Pro, so that there is uniformity on both sides when you hold it in landscape orientation. Then there’s also the front-facing stereo speakers, as well as a second USB-C port on the left.

Upon picking up the ASUS ROG Phone 6 Pro, the first thing that you’ll notice about it is its weight. It is pretty immense, likely due to the large 6000mAh battery inside. While it won’t feel too uncomfortable when you hold it in two hands while gaming, you’ll feel the strain a lot sooner under more relaxed use scenarios like watching videos.

If you like personalising your phone with custom notification sounds and ringtones, then here’s the first major bummer. For whatever reason, for notifications the ASUS ROG Phone 6 Pro only accepts files of MP3 and OGG formats, and they have to be of 300MB or smaller. Which feels oddly arbitrary, especially in this day and age. Alarms and ringtones are unaffected, fortunately.

On the software side of things, the ASUS ROG Phone 6 Pro comes with its own unique overlay, but otherwise feels a lot like stock Android. As a result, the user experience is quick and snappy. But when you need to go deeper into the gaming end of things, there’s the Armoury Crate. Here, you get the usual options like setting up the AirTriggers and other macros. Here’s also where you go to set up the ROG Vision display, if you feel so inclined.

Speaking of AirTriggers, these work as well as ever. In practice, they are pretty sensitive, activating at the slightest tap. For the most part, this is great, though on balance this can occasionally result in mis-pressings. Having said that though, after having experienced physical shoulder buttons like the ones found on the more recent Black Shark models, I have to say those still feel better to use.

When it comes to performance, you’d be glad to know that the ASUS ROG Phone 6 Pro is simply a powerhouse. It’s producing impressive numbers as you’d expect on the synthetic benchmarks, owing to the Qualcomm Snapdragon 8 Plus Gen1 chipset. The actual gaming experience is much the same story; I’ve experienced no stuttering or lagging while gaming, even if these days it’s limited to Yu-Gi-Oh! Master Duel. Engaging the X Mode, which is what the company calls the gaming mode, doesn’t yield any obvious improvement on top of the already buttery smooth performance.

That being said though, battery life does take quite the hit if you do game on it. Throughout the review process, I let the phone run with a dynamic refresh rate. This way, engaging in just over an hour of gaming a day makes it so that you’ll just about comfortably end the day with about 10% of battery charge left. If you don’t game at all and are prudent with your social media scrolling and video streaming, you can stretch a single charge out to two days. Though you’ll be cutting it close on the second day.

If you use the device for a video marathon, then it lasts just shy of 19 hours. As for charging speed, with its support for 65W charging it can go from flat to full in just shy of 40 minutes using the charging plug and cable that comes in the box.

The ASUS ROG Phone 6 Pro comes with a triple camera setup featuring a 50MP main + 13MP wide-angle and a 5MP macro camera. The main shooter is being highlighted as the Sony IMX766, so at least on the hardware front, things are off to a good start.

Fortunately, we’re not off to a false start either. Overall, the shots taken with the phone don’t look too shabby. Colours are accurate, detail retention is good. For the most part, the phone switches to Night mode automatically if it detects low light environments. And the Night mode makes for pretty good shots too, at least as far as noise levels are concerned. Though detail retention could always use more work, as usual.

Worth noting though that you’ll want Night mode to kick especially in low light indoor settings. This is because otherwise the noise levels would ruin an otherwise fine shot.

As a gaming phone, the ASUS ROG Phone 6 Pro has competitors that do mostly the same things that it does. Now that mobile gaming isn’t exactly a niche anymore, there are a couple of competitors around.

Launching more or less around the same time, the Black Shark 5 Pro comes in pretty close to what the ASUS ROG Phone 6 Pro has to offer. It’s got a 6.67-inch Full HD+ AMOLED display with a 144Hz refresh rate and 720Hz sampling rate, a Qualcomm Snapdragon 8 Gen1 chipset, and a 4650mAh battery that supports 120W charging. Most importantly, it has physical shoulder buttons.

For its cameras, it packs 108MP main + 5MP telephoto + 2MP macro camera combo at the back, and a 16MP camera in front.

The Red Magic series of gaming phones has its latest contender in the form of the Red Magic 7S and its own Pro variant. Both feature the Qualcomm Snapdragon 8+ Gen1 chipset and a 6.8-inch AMOLED display. Oddly enough, the base model here gets a 165Hz refresh rate while the Pro is stuck with 120Hz. RAM and storage configurations return to normalcy with the base device having up to 16GB of RAM and 512GB of storage space, while the Pro model goes all the way up to 18GB of RAM and 1TB of storage.

As for cameras, both feature a 64MP main + 8MP wide-angle + 2MP macro shooters at the back. For their secondary cameras, the base model comes with an 8MP shooter while the Pro model pushes this up to 16MP. Both make use of under-display tech, so there are no obvious punch hole cutouts.

The ASUS ROG Phone 6 Pro is, once again, a strong entry into the series of gaming phones that the company makes with its gaming-dedicated sub-brand. It offers the expected marginal improvements that you’d expect from a sequel, and it has the performance necessary to be worthy of a gaming phone. Which is fine if that’s all that you’re looking for in a phone. But even then, as useful as AirTriggers are for mobile gaming, physical keys are really where it’s at.

if you want your phone to do other smartphone things like surfing the web, the ROG Phone 6 Pro doesn’t offer much else. Despite its large battery, its battery life is not especially impressive, especially if you game for any significant amount of time. And even with prudent use, you can just about squeeze two days’ use out of it. Then there’s the arbitrary limit of notifications, which is just puzzling in this day and age.

As someone who frequently uses custom notification tones, that last point is a major turn-off. Which makes recommending the ASUS ROG Phone 6 Pro a little difficult, considering its asking price. But if that doesn’t matter to you, and all its other gaming bells and whistles are up your alley, then this is definitely a phone to consider over your average flagship device.