As if the market for gaming-capable tablets wasn’t already niche enough, ASUS decided to shrink that niche into an even smaller segment with the introduction of the Flow Z13, its very first bonafide gaming tablet. It’s not just a slapstick effort that we’re looking at here either: it’s got a top-notch Intel 12th Generation Core i9 mobile CPU and, in spite of its size, an NVIDIA GeForce RTX 30 Series discrete GPU.

But having an all-powerful processor and graphics unit does not a wholesome, immersive gaming tablet experience make. And to that end, we’re here to find out if this machine is bee’s knees or just a passing mention. Now, it should be made clear that the Z13 that I have is just one of three SKUs ASUS is offering to the masses. For that matter, and like the X13, one of the SKUs has the option of cramming a 4K panel into that already tight 13.4-inch display, although I have consistently raised the question “Why even” with ASUS on implementing such resolutions in restrictive form factors.

Mercifully, that seemed to one of the only major physical options that the Z13 seems to offer, the other option being the choice to have a Core i7-12700H fitted inside instead of the powerhouse Core i9-12900H that is inside this unit. As far as tablet designs go, ASUS isn’t really trying to reinvent the wheel with the Z13. Let’s go through the checklist: you’ve got the standard slate form factor, a detachable display cover that also doubles as a sort of pseudo-mechanical gaming keyboard, and while I don’t have the pictures of the accessory, it also comes with a stylus. The whole idea of having a tablet is, after all, to provide its users with the flexibility to be used in less conventional scenarios, such as allowing them to jot down notes, read documents, or even watch the odd video or two, the Z13’s gaming pedigree notwithstanding.

Another factor that separates the Z13 apart from the other tablets is the vents found on the back and at the top of the device. The placement of the vents are slightly unique but understandably practical; air is drawn in from the bottom and exhausted out the vents in the spine, which creates a little vortex that I can feel whenever its is under load. On another note, the all-metal chassis of the Z13 is a pleasant feeling in my hands and cools down very quickly after a gaming session.

That all-metal design also extends to the integrated kick-stand that has a radius of 170°, allowing the Z13 to enter a near flat state. Word to the wise: I wouldn’t recommend that you try and push it all the way down, for fear that you could snap the kickstand off its hinges. Moving on, the next obvious, if not stark aesthetic point of the Z13 is the little window that gives users a view of, of all things, a bunch of capacitors and modules that are neither its CPU nor GPU. Seriously, of all the cases of missed opportunities, this is very clearly one of the more obvious ones that ASUS could have made interesting, but ultimately decided to just slap on to the laptop, purely for posturing purposes.

The 13.4-inch display is still a looker, but that is to be expected.

On another note, the Z13’s display is definitely stunning to look at, but to be frank, there really isn’t anything groundbreaking about it that I would shout about. The options and arrangements for the Z13 is notably similar to the X13; you either get the Full HD 120Hz or 4K60Hz display, with the one that I am reviewing sporting the latter and is the option that I would clearly choose when presented with.

Ports-wise, the Z13 gets a single USB-C Thunderbolt 4 port on the left side, next to the XG Mobile interface that allows you to connect ASUS’s XG Mobile eGPU. On the right side, you get a USB-A 2.0 port, which is a bit odd, since I would imagine that USB 3.0 Gen1 to be the bare minimum on laptops and tablets today. In any case, the right side is also where the power button and volume rocker is housed. Despite weighing a mere 1.18kg, I can still feel the Z13’s weight whenever I am cradling it in one arm. As I mentioned, one of the primary features of using a tablet is to be able to perform non-gaming, non-laptop tasks with it, and for that matter, this laptop cum tablet pulls off that feat well. At least, for a Windows-based device, but then again, the included stylus does make it a lot easier to jot down notes. If there is just one flaw that I must pick with this, though, it would be that there is no dedicated compartment for the stylus, built into the Z13’s chassis or included keyboard cover.

Speaking of the keyboard cover, the detachable component isn’t the sturdiest thing I’ve used; the overall typing experience is wobbly and with each keystroke, I can actually feel the cover flex and give in to the weight of my fingers. For another matter, the RGB on the keyboard isn’t per-key, but if you’re like me, this isn’t such a big deal, since I just leave the feature as in.

Still on the subject of RGB, that same Aura Sync-controlled rainbow can also be seen in the little window behind the Z13, but again, it’s lighting up a part of the gaming tablet’s PCB that isn’t particularly interesting to look at.

The design is still not ideal for the lap.

But the 16.8 million coloured lights and clean-cut aesthetics aside, there is one problem with the Z13’s form factor, and it’s a problem shared by Microsoft’s Surface Pro tablet computers: it’s not a device you can prop up on your lap easily. Honestly, trying to prop it up with the kickstand is so very uncomfortable, and even if you open up the kickstand all the way, you’re left with the problem of trying to figure out how to type on the keyboard that is being pushed all the way into your stomach.

Then there’s the Z13’s ventilation process. Personally, I think it’s an efficient design; by absorbing air from underneath the kickstand and exhausting it out through the top of it. In practice, the air should be pushing away from you, but in actuality, the rear vents actually suffer from a case of blowback, where the air actually blows out the way it’s supposed to go in. I know this because. when I’m gaming – obviously, that’s when the fans kick in and really start to ramp up – I can actually feel that blowback, specifically to my right hand, and that’s because I’ve whipped out a wireless mouse to use with the Z13. In line with the heat, the fans inside the Z13 can also get very vocal but surprisingly, there is no coil whine, nor do they sound like a jet’s about to take off. Mercifully and once again, this only happens when I am performing tasks that the laptop would otherwise find labourious.

Perhaps one of the more disappointing aspects of the Z13 is its battery life, and if I dare say, it’s a drawback that was present in the X13 as well. On a full charge, its 56WHr battery drains itself in just shy of five hours. To be relatively fair, those are pretty average legs, but considering most gaming laptops in the last year – case in point, ASUS’ own ROG Zephyrus G14 and Razer’s Blade 14 Ryzen laptops – five hours on a 13.4-inch tablet isn’t what one would consider as bragging rights these days. Perhaps the biggest party favour of the Z13 is that, even without an XG Mobile attached to it, it is still capable of operating as a laptop does with a single 100W USB-C cable. Mind you, that includes the task of not just day-to-day use, but also running games like you would on a desktop or conventional gaming laptop that’s also connected to a power source.

To be fair, though, the desktop-level gaming performance isn’t what I would describe as outstanding or mind-blowing; the thing’s rocking an RTX 3050 Ti here, so you will have to manage expectations here. That said, the gaming experience with the Z13 isn’t actually as bad as the critics have made it out to be. Yes, it’s not hitting exceptionally high framerates and holding them there, nor is it breaking ground in the graphics department. With the graphics on most titles set at the Medium preset, I’m angling anywhere between 26 and 40 fps on average, and with RTX and DLSS capable titles like Cyberpunk 2077, that’s an average of 30 fps throughout. Turn off disable the two features, and that number spikes into the 40 fps range. All in all, this gaming tablet will do in a pinch, especially if you’re just itching to squeeze in a gaming session at a cafe or while waiting to catch a flight.

Another surprise is that I experienced no thermal throttling with the Z13. Throughout the review period, neither the CPU nor GPU ever reached the 100°C mark, with the 12900H peaking at a 87°C, while the RTX 3050 Ti capped out at 64°C. In all honesty, that’s actually pretty remarkable for a tablet housing a high-end Intel processor and NVIDIA discrete GPU. 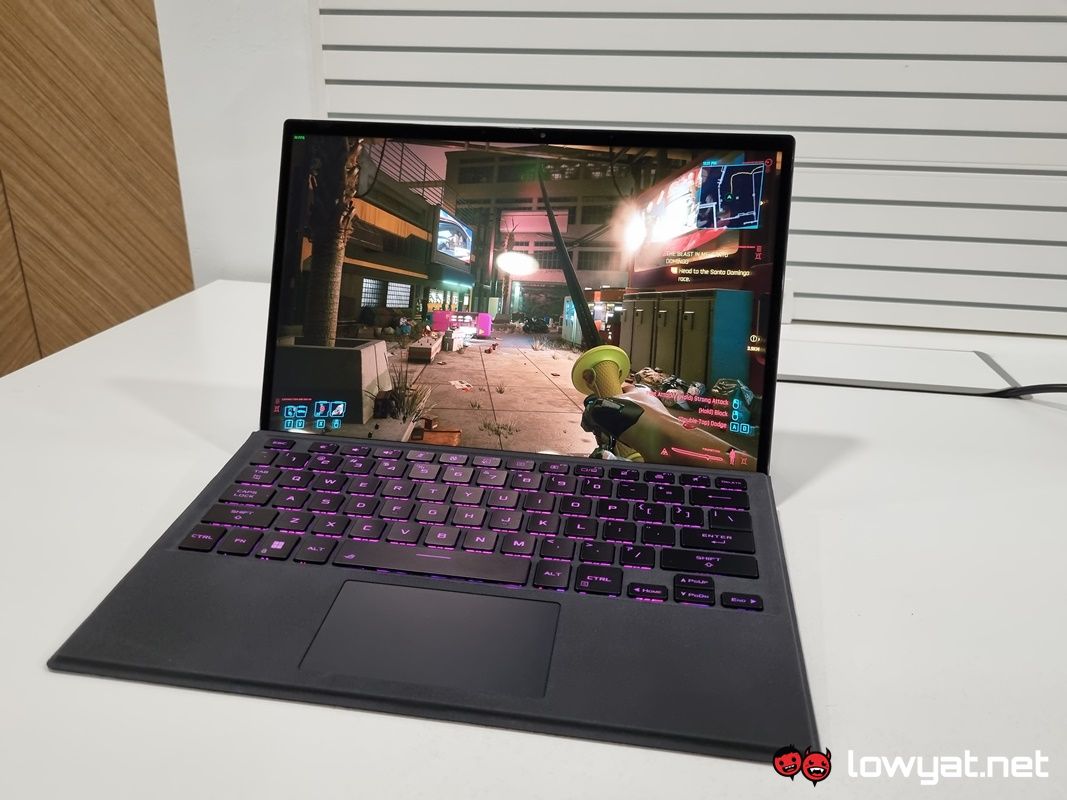 The ASUS ROG Flow Z13 was clearly designed to be a jack-of-all-trades, but falls a little short from the finish line.

As I said at the start of this review, the Z13 is a product that caters to a very, very niche market for consumers that probably want bragging rights about owning what can only be described as one of the world’s only gaming tablet, and the fact that it is more than capable of serving the role of both a tablet and notebook, wherever and whenever the need arises. That, and the fact that they don’t mind lugging around an additional 1kg in the form of the XG Mobile, in the event that they need a little pick-me-up in the graphics department.

On a related note, there is also the price of the Z13. Standalone, the tablet itself starts at a hefty RM7999, while the bundle with the XG Mobile that was made available back in April – before ASUS officially started selling the tablet a la carte – costs a whopping RM15999. At that price, I can most certainly suggest alternative laptops with similar, if not considerably better specifications. The only problem is: none of them are touchscreen-enabled gaming tablets.

So, at the risk of repeating myself, if you’re simply looking to get the Z13 for bragging right, then purchase away. 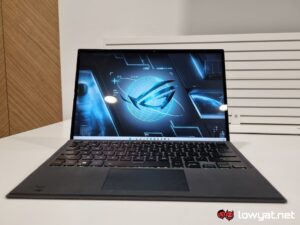 The post ASUS ROG Flow Z13 Review: A Step Forward, But Still Not There Yet appeared first on Lowyat.NET.