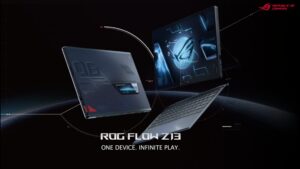 ASUS’ is officially launching the ROG Flow Z13 which is finally here in Malaysia. The brand’s most powerful gaming tablet and successor to the Flow X13, the tablet will be available in three SKUs, with two of them being available starting today.

Display-wise, the panel size is the same at 13.4-inches, with a 16:10 aspect ratio across the board. In regards to their resolution, though, both the 12700H and 12900H are available with Full HD (1920 x 1200) resolution with 120Hz refresh rate options. There is also an option for a 4K (3840 x 2400) panel with 60Hz refresh rate, but that’s only available as another model for the 12900H SKU. Regardless of the display option, all variants of the panel are Pantone Validated, support Dolby HDR, as well as a stylus that comes bundled with the tablet.

On another note and regardless of the CPU or GPU, all variants of the Flow Z13 support Wi-Fi 6E and Bluetooth 5.2. Also, the tablet comes integrated with an 8MP camera and 720p Webcam, the former allowing you to snap a picture in a pinch. Moving on, it also comes bundled with a keyboard that features backlit chiclet RGB MUX keys. Oh, and the tablet houses a 56WHr, 4-Cell battery that powers all of the components.

Last but not least, charging the Flow Z13 is conducted through the provided 100W USB-C PD charger.

The ASUS ROG Flow Z13 will retail starting from RM7999 for the Core i7-12700H model, while the one with the Core i9-12900H and FHD 120Hz display will cost RM8799, with both models available starting today. Of course, there is also a bundle option where consumers can purchase the Flow Z13 with the 2nd generation XG Mobile, but that will only be available starting from April and will retail for RM15999.