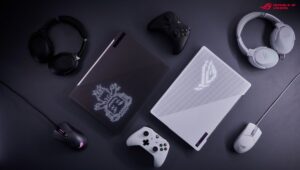 Much like its predecessors, the new G14 retains the same 14-inch form factor but that’s where the similarities end. One major and primary difference between the new G14 and the past models is that the 2022 model is the series’ first AMD Advantage laptop which means it is an all-AMD first thin and light gaming laptop.

In terms of hardware, the new G14 is powered by AMD’s latest Ryzen 9 6000 series mobile APU but more importantly, the GPU is now a Radeon RX 6800S, instead of an NVIDIA GeForce RTX 30 Series variant. Because it is fitted with the latest Ryzen 6000 Series processor, that also means the G14 gains access to the new DDR5 memory standard, along with Wi-Fi 6E.

Another change to the new G14 is the display, although to be fair, ASUS is making it a standard implementation for pretty much all gaming laptops in the series. It’s called the ROG Nebula Display and it comes in two flavours: standard and HDR.

In the case of the 2022 G14, the 14-inch display is the standard Nebula Display but even with that, it has a lot to give. For starters, the TUV Rheinland-certified display has a DCI-P3 colour accuracy of 100%, supports Adaptive Sync, and has a peak brightness of 500 nits. Not to forget, the display also has a native QHD resolution, with a maximum refresh rate of 120Hz and a response time of 3ms.

On another note, the 2022 G14’s display is also bigger, relatively speaking of course. Compared to last year’s model, the new Nebula display has a 16:10 aspect ratio, giving you more screen real estate at the base. But guess what is even more refreshing than the aspect ratio? ASUS finally found enough space to reinstate a webcam at the top of the display.

Moving around the back, it’s clear that ASUS has also given the aesthetics of the G14 some attention, particularly with the new Anime Matrix LED. Again, to use last year’s model as a comparison, the Anime Matrix LED back is brighter and more…well, expressive than the last. Each LED light now illuminates nine holes instead of four; the number of holes has increased to 14969 from 6536, and there are 1449 mini LEDs behind the panel, up from 1215 LEDs.

Underneath the hood, ASUS has also spent some time redesigning and reengineering its new cooling solution for the new G14. The end result is a vapour chamber that essentially covers close to half of the laptop’s motherboard while improving overall heat transfer and increasing its GPU thermal capacity from 65W to 100W. That, and the continued use of Liquid Metal compound, courtesy of Thermal Grizzly.

As for when the new ASUS ROG Zephyrus G14 will be available, the laptop is slated for February availability, although a specific date has yet to be given. That said, we’re definitely looking forward to reviewing the laptop when we can, especially since it’s an AMD Advantage Edition machine.

EDIT (10:45 AM): The original version of this article stated that the 2022 ROG Zephyrus G14 is ASUS’ first-ever AMD Advantage machine. This turns out to be inaccurate as the first such machine is actually the 2021 ROG Strix G15 Advantage Edition and we regret the error. Thanks to Twitter user @mangkoran for pointing this out.